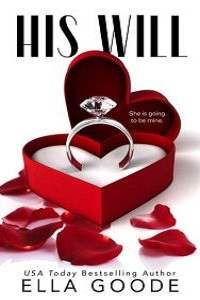 The house is cold when I arrive, or maybe it’s her. Shrouded in black silk, Sera greets me stiffly at the door.

I swipe the water off the top of my head but keep my jacket on. I think I’ll need it. “Name’s Jericho, as you know, and Michael is dead. There’s no need to lie anymore. We both know you wish you never had to see me again.”

Her cheeks pinken, but her tongue isn’t shy. “Lying to you would suggest I’m making an effort to please you when we both know I don’t give a shit about you.”

I tweak her chin because I know it will rile her up even more. On cue, she knocks my hand away.

“Is it because I haven’t paid you yet? My check is in the mail.”

Her slap is expected. The power behind it takes me by surprise. I rub the side of my face and ask, “Have you been working out? You’re stronger than you were years ago.”

“Why couldn’t you have died instead of Michael?” she hisses.

I pretend that jab doesn’t hit and smile. “Because he was good, and I am not.”

Before she can curse me again, Charles, Michael’s lawyer, peeks out the door of the study. “Ah, you’re here, Jericho. We’ve been waiting. Come in.” He gestures hurriedly with his hand. “The others are restless.”

“After you.” I hold out a hand for Sera to precede me. She gathers her silk in her hands and hurries forward. It may be the lighting or the fact she’s a blonde wearing black, but Sera looks extra pale. I guess her husband died and she could be mourning him, but Sera’s a faithless brat who is on the verge of inheriting a ten-figure fortune. You’d think the number of zeros in Michael’s bank account would put a little color in her cheeks. Even so, she's still as beautiful as I remember. Her beauty haunts me nightly. I always think my memories about how beautiful she is must be wrong, but every time I see even a picture of her they’re proved to be right. Especially when I see her in the flesh.

Inside the study, Michael’s vultures await. His dullard, alcoholic father, William, sits in the chair closest to the fireplace. His red cheeks indicate that the drink in his hand is not the first of the night. His greedy stepmother, Anna, is seated next to him, her neck craned as she tries to get a glimpse of the will and, finally, slouched down in the last occupied chair is Lucas, his feckless stepbrother.

All heads swivel toward me as I enter.

“You,” Anna sneers. She wrinkles her nose as if I smell bad and twists around to face the desk. I’m sure I’m supposed to be offended.

“Why are you here?” snaps Lucas.

“I’m the executor of Michael’s estate,” I inform the younger man.

He grimaces. “You should turn down the money. It’s not like you need it. You have your own vaults of cash.”

“It’s vaults of gold, and an executor does not inherit anything. Rather I see to the orderly distribution of the provisions of the will.” I pull out the last empty chair and beckon for Sera to be seated.

Anna’s nostrils flare in disgust. I ball my hand into a fist. It’s one thing for me to insult Sera, but this crow who would steal a ring off a man’s corpse? She’s lucky she gets to breathe the same air as Sera.

“Charles, Anna looks sickly,” I say. “Let me call the staff and have them help her get home. She can get the details of the will later from William.”

“No.” The older woman nearly shouts her refusal. “I’m perfectly well.” She shoots me an evil stare that conveys her unadulterated hatred.

“Really?” I drawl. “You looked like you were about to faint, but if you’re fine, we should get started. Charles?”

“Yes, very good.” He gathers up the two-page document that lays out the main bequests left by my cousin. There are small bequests to staff members which Charles had relayed earlier and then larger ones to foundations and charities that I’ll have to take care of beginning tomorrow. Uncle William’s Scotch is fast disappearing, and Lucas’ face is slack with boredom. He isn’t interested in what other people are receiving—only himself. After a half hour, William finally reaches the end. “To my father, in the event he survives me, I leave all the Conrad properties that were held by the family at the time I turned twenty-five as I had nothing to do with their survival. To my stepbrother, Lucas, all his outstanding debts shall be paid. The remainder of the estate shall be left to Jericho Bancroft for his use during his lifetime with the provision that he provide for Sera James nee Goodwin in the manner to which she has become accustomed. Whatever funds that survive Jericho shall be passed down to her issue.”