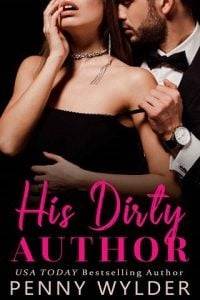 My mother always told me I was too young to be so stressed.

She told me when I was just six, learning to tie my shoes, furious the older kids could do it.

She told me when I fussed over going to the prom or not-- not, by the way, because all the boys were too immature.

And she told me when I sent my first query letter to an agent for my books.

Maybe she was right those other times, but now, as I pace outside the far too grandiose doors of that very same agent who agreed to take me on, I know this is when it's okay to be stressed. Who cares if I'm only eighteen? I’ve always felt older, anyway. An old soul.

Which, my agent Michael told me, is a great quality. Now I'm here, pacing outside his office with its elaborate doors. All he cares about are those fucking doors. He constantly tells the story about buying them off some church in South America. Or something like that. If I’m honest, I don’t really listen when he goes on tangents about places I've never been in my short time on this earth. I let him talk and I go back to working out a plot problem or tweaking a piece of dialogue. All in my own head, of course.

Right now, I’m waiting for him to finish reading the final chapters of the book that I’ve been working on for months, before I finished high school, in fact. It's been slowly coming together, put aside for other ideas that seemed better but weren't. That's why they were always rejected. But this? This is the one. Finally, I think that he’ll agree to send me on submission. I can practically taste it with this book. The characters leap off the page, the emotions are there; the dialogue is snappy, and the sex is hot.

I’m not one of those writers that thinks everything they write is god’s gift to man and that it’s going to be a worldwide bestseller, but I can see this one doing well. Hopefully. Optimistically. God, I hope that he likes it. I can’t stop biting my nails and wearing a path in the plush carpet.

My heart jumps into my throat when I hear footsteps. The door opens and he puts his head out. “Come on in, Erin.”

There are approximately a million baby kangaroos jumping up and down in my stomach. Joeys. That’s what they’re called. I sit in one of the big chairs on this side of Michael’s desk and do my best not to fidget. He was happy to take me on as my first agent, but nothing I've given him has stuck. Either I’ve been just behind a trend, didn’t hit the tropes hard enough, or I just wasn’t writing well enough. He'd always assure me the big idea was coming, that I was just too fresh, too young. I’ve been driving myself crazy trying to get a book exactly right.

It’s not like he’s stifling me. Michael Collins is one of the best literary agents in New York. Maybe even the best. The fact that he took a chance on me at all is a miracle.

I shake my head. “Because I finally feel like this book is good enough to be the one and I’m dying to know what you think about it.”

He smiles, but with that smile my stomach drops, because I’ve seen that smile before and it’s the smile that comes with an apology. “I think that it’s almost there.”

The urge to tear up is immediate, but I force it back. I need to be a professional. “Revisions?”

“Actually,” he says, “I have a bit of a different idea. I think you need to get out of your own head and expand your writing in a different direction.”

Not to mention that Mr. Ellis happens to be smoking fucking hot, and everyone who’s ever read one of his books has ended up with one hand in their pants, thinking about one of his characters. Or possibly him.

And I do mean everyone. Men and women.

My mother never found the books of his that I'd sneak home. Lying in my bed at night, Malik's words guided me to discover more about my inexperienced body than I ever would have guessed. He was my first crush, in a way.