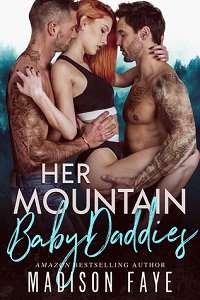 I gasped as the water chilled me to my core, my body tensing and shivering as I plunged under the surface.

Holy shit was it cold.

My head broke the surface, and I exhaled sharply, sending water droplets flicking away from my lips. I tossed my head back, pushing my long red hair out of my face before looking up at the clear blue sky and grinning.

Yeah, it was cold, but damn did it feel good.

Being out in the woods always felt good to me. It was my escape, and this trip was all about escaping. Well, that and the wedding of course.

I’d been hiking and camping and outdoor exploring my whole life, but it wasn’t until I’d met my best friend Katrina freshman year of college that we’d come up here to Blackthorn Mountain. Katrina came from this very weird, very wealthy family, but her beatnik uncle had left her his secret getaway cabin up here.

We’d come up a few times in college to hike around and stay at the place, but it’d been years since I’d been up here. Katrina had, though. A few months back, while trying to do a little escaping of her own, she’d come up to her old cabin to find that wacky Uncle Stan had also maybe left it to someone else.

Someone else who happened to be six-foot-four of pure, growly, muscley, gorgeous ex-marine.

Someone who also happened to be living there when she tried to escape a snowstorm.

But lo and behold, Katrina had found more than just a stranger in her uncle’s cabin. She’d found the happy ending she’d always been looking for in Braun, and now, they were getting married.

Yikes, that felt weird to say. My best friend was getting married. In two days, specifically.

Katrina and Braun were actually with her parents at the moment, and had been gone from the mountain they loved for a couple of days — something I knew Katrina tolerated, but Braun hated. But I also knew he was willing to do it for her.

They’d given me full reign of their house — what had previously been the cabin and was now turning out to be quite the place. But I’d declined, and instead, I’d brought a small pup-tent with me to really get that woodsy escape I needed. I’d camped the night before next to the freezing mountain lake I was taking a chilly dip in.

I mean, hey, it was the woods, the middle of nowhere, and there was noone up here anyway. And like I said, this was seriously the escape I needed. I’d just had way too many losses recently.

The first had been Dave and me breaking up.

Well, no, that’s being kind. The better wording is “Dave had been a lying piece of shit and had fucked my skank secretary.” And not only had he fucked my secretary, he’d knocked her up. And that only made it ten times worse because it drove to the heart of our problem and made one thing very clear.

…That our “problem” wasn’t him.

Dave — the one who’d never even wanted kids, could have them. And me? The one who really wanted to me a mother? Well, I couldn’t.

Sucks to be me, huh?

But whatever. The whole Dave debacle had been a year ago anyway, and trust me when I say I was way over it. And in the meantime, I’d thrown myself into my job as an attorney and junior partner at Bloomington and Stein.

Oh, right, that the second loss — getting passed over for full partner in favor of a way younger, way greener attorney who’s father happened to be golf buddies with Lawrence Stein, one of the senior partners.

I didn’t miss Dave, that’s for sure. What I did miss was what being in a long-term relationship could mean: kids. But after Dave, I’d gone my own way with that. See, I wanted kids. I was still young, but I was also totally into my job, even after getting snubbed for the promotion. I had the means, I had the drive, and not having a partner wasn’t going to stop me one bit.

So far though, I’d done three attempts at IVF, but it just wasn’t working. I’d go through the whole thing — finding the right sperm donor profile, taking all the shots from my doctor, staying extra healthy and away from really anything fun, and then playing the whole waiting game.

And after three times, I had nothing to show for it.

That week, a few days before I’d come up to the mountain for the wedding, I’d gotten the news about the third attempt, and I’d done what I used to do to get away from it all: escaped to the woods.

So now there I was, skinny dipping in the middle of nature and actually feeling great. My tent was already packed, the sun was high in the sky, and in a few hours, I’d be hiking over to Katrina and Braun’s place. In the meantime though, I had sunshine on my bare skin, the thrill of being naked making my blood pump a little hotter, and a flask of pretty nice whiskey sitting on the rocky ledge next to me.