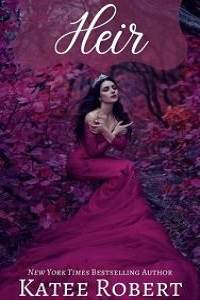 I can feel Malachi’s heartbeat. It throbs in my chest, a steady thump that would be reassuring if it wasn’t so foreign. After all, it’s not as if I’m lounging with my head on his chest the way I have many times in the last month. Malachi isn’t even in the house.

He’s across the county, the miles stretching between us.

I rub the back of my hand against my sternum, but if the last four weeks have taught me anything, it’s that the sensation of multiple hearts nestled up against mine is magical in nature, rather than physical. Malachi assures me that I’ll get used to it eventually, which might actually be reassuring if his dark eyes weren’t worried every time he looks at me. Better than Rylan, who won’t look at me at all. I still don’t understand why he hasn’t left our little nest and taken his chances on his own. I don’t understand him.

Wolf, true to form, offered to carve open my chest to relieve me of the sensation.

I don’t look over as Rylan’s icy words cut through the stillness of the loft. “You’re talking to me now? How novel.” I drop my hand, and then have to curl it into a fist to resist going back to rubbing my sternum when Malachi’s heartbeat kicks up a notch. The feeling in my chest intensifies, signaling proximity. “He’s coming.”

At that, I finally face him. “It’s been a month. Leave if you hate it with me that much.”

“I would if I could.” He practically hurls the words at me. His hand goes to his chest, mirroring me. He looks just as perfectly put together as he has from the moment I met him, his dark hair cut short on the silvered temples, his endless supply of suits without a wrinkle out of place. The only time I’ve seen him remotely rumpled was the night we all fucked, subsequently awakening my powers and landing us in this mess.

“Just kill me then. It’s what you wanted from the beginning.”

His eyes flash silver, the only sign that I’ve gotten beneath his skin. I shouldn’t be so petty as to enjoy aggravating Rylan, but he’s like a wall of knives I brush against with every movement. Malachi and Wolf might not be overly comfortable being tied to me, but at least they like me a little. Rylan’s hated me from the start—a very mutual sentiment—and now we can’t escape each other.

“Would that I could.” He turns and stalks to the balcony doors, pausing to strip and systematically fold his clothing over the chair set there for what I assume is entirely that purpose.

I know what’s coming, and as such, I should look away. But I’ve had so few pleasures in my life that I find myself unable to resist a single one, no matter the source. A naked Rylan is a pleasure, what comes next even more so.

He’s gorgeous in an entirely different way than Malachi and Wolf. His suits do a good job of masking his strength, but out of them, he looks nearly as big as Malachi. He also has little dimples at the top of his ass that, despite myself, I want to lick. As much as I’d like to blame the bond for that, the truth is that I found this asshole attractive even before the night the bond snapped into place.

He steps out the doors and there’s—I’m not sure how to explain it—a ripple, almost. As if reality gives a little shudder, a tiny tear, and then Rylan is gone and a giant black bird perches on the balcony in his place. A flap of its massive wings and he’s gone, flinging himself out into the darkness.

He’s moving quickly in the opposite direction Malachi is coming from, putting miles between us with ease. I feel each one like a nail driven into my chest. I hate it. I want him gone, but the more distance he puts between us, the greater the urge to demand he return.

To force him to return.

I stomp down on the urge and turn away from the balcony. I don’t care what Rylan says about seraphim. I don’t care that I can no longer deny that I’m one of them. I don’t care about their history of bonding with and abusing vampires. Doing that intentionally would make me no worse than my monster of a father, and that is something I’ll never do.

I can feel Wolf downstairs, likely painting again. The man holds multitudes and while I can appreciate the beauty behind his art, it’s highly disturbing. Wolf is chaos personified, and that truth is even more apparent when he paints. He might kiss me or try to cut my throat on our next meeting. I never know. He scares me, but a small, secret part of me likes it. I feel particularly alive when I’m dancing on the blade edge with Wolf.