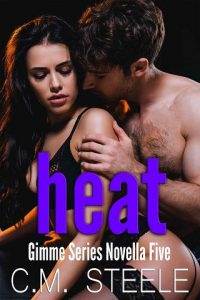 It’s the middle of summer, and yesterday’s rainstorm intensified the heatwave surging through the city. I swipe the back of my hand across my forehead as I mess with the A/C unit again. It conked out on me, waking me out of my sleep. My sheets are drenched in perspiration, so laundry day will be bumped up to tonight after my ten-hour shift.

Fiddling with it for five more minutes, I throw in the towel and decide that I’m going to have to call someone to have it fixed or more than likely get a new one. The latter option probably being the cheaper one. Not that I can afford it either way, but who can stand the sweltering heat in the middle of Miami without the air conditioning? Even though it’s early, the sun scorches everything it touches.

I can already feel the sweat sliding down my spine, coating the back of my tank top. If I didn’t need to go to work, I would just head to the beach and dive right in. Not an option today, at least.

Groaning, I enter my bathroom to shower for the second time this morning. At least I’ll cool down briefly. It’s taking forever for the water to heat up, so I jump in and immediately regret it. The water’s like ice as it hits my skin. Son of a bitch. Another problem I don’t have time or money to deal with. Luckily this problem belongs to the property manager.

Jumping out as fast as I can, I dry off and run into my bedroom. For a few seconds, I’m freezing, but the stifling heat in the apartment warms me up before I can get fully dressed.

I find another pair of khaki shorts and a pink tank to slip over my underwear and bra.

The Miami heat starts to take over my formerly chilled skin as I go on a scavenger hunt for my sandals. It takes me forever, so I find another pair of less comfortable ones and slip my feet into them. “These will just have to do.”

As I was making my rounds in the hunt for my sandals, I didn’t see my brother, Matthew. Where did he go? My brother showed up two months ago, seeking shelter with me temporarily while making another stop through Miami. He loves his vagabond lifestyle, living off others whenever he can, takes no responsibility for shit, and I don’t trust him.

Suddenly, I’m hit with a bad feeling. A ball forms in the pit of my stomach. Dropping down to the floor, I pull out a small coffee can with my emergency savings in it. Most people would find that foolish to keep it there when I could put it in the bank, but I refused to pay fees because I didn’t have the minimum balance required. I’d been hit with those kind of banking fees before, so I passed on a savings account.

It feels too light, so I pop the lid and shake my head.

“It’s all gone,” I gasp, falling back onto the floor.

“Bastard,” I huff, shaking my head and doing my best not to cry. Not a single penny remained of the five hundred and twenty-three dollars I scrounged up.

My useless brother has gone too far. I can’t believe I fell for his poor me act again. Where the hell is that prick? I’m going to strangle the fucker. He lost his job for the thirtieth time in the past six years. I’m the younger one, and he’s always been the screw-up. First, it was girls, then it was drugs and booze. He had addictions that were beyond healthy, but I’m done being there for him.

He’s been living with me for two months now, and I’ve had enough, but a part of me is afraid to kick him out. I’m not scared that he’ll have nowhere to go. I’m petrified of what he’d do to me if I demanded he leave. He’s shown a side of him that frightened me several times. There was a dark look in his eyes when I told him to clean up his mess. He reached out and grabbed me by the throat, squeezing just enough to give me a taste of what he was capable of. I shiver thinking about it. I’m glad he’s gone. Hopefully, it’s permanently.