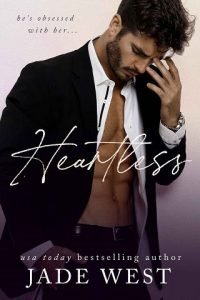 I’d always been a monster for seeking out the forbidden, but even I was pushing my insanity to the limit that night.

Disguised by nothing more than a black leather mask covering half my face, I mingled my way through the guests. I was right at the heart of it – pompous bullshit, bloated pretences, false kisses, and fake smiles. Everything I’d have expected from the Constantines.

I shook my head and fixed the little waitress in my evil stare. “Mineral water.”

She scuttled away, rattling her tray of glasses as she went.

Tinsley Constantine’s coming-of-age masked ball was bursting at the seams. Hundreds of stupid fools chattering in stupid foolish costumes, and I was twisting amongst them like a vine with invisible thorns.

I could almost smell them – the Constantines. They were crawling through the place, billowing through the masses with their idiot blonde bullshit. Vivian, Keaton, and Tinsley herself were prancing around as though they were on a film set, but not nearly so much as Caroline. The mother of the whole damn posse was dressed up like some kind of ice queen in a ridiculous diamanté mask, smirking at everyone she passed like she was royalty. The very sight of her made me retch.

But, despite all her efforts with the crowd, it wasn’t Caroline Constantine who was sucking my attention like a black hole. It was the woman in gold. The woman owning the room without even trying.

She was wearing a Venetian mask that covered so much of her face I could barely make out her features, but that didn’t matter. I didn’t need to see her face. The visible parts of her were enough to drive me wild.

I’d been watching her swirling from guest to guest, swigging back the fizz and guffawing at each one like they were the most hilarious person she’d ever met. Her laugh was a school girl giggle with a tinge of sexy in the lower notes, enough to grate my teeth. Yet still, I couldn’t stop looking at her.

The gold silk of her ballgown was a perfect fit on a perfect body. Sloping curves in a delicious hourglass – a gorgeous pedestal of glamour to highlight the elegance of her slender neck. Oh, how I’d love to crush that neck in my hands as I fucked her rough enough to hurt.

Her blonde curls were held up in twists that glittered with diamonds. Her fingers were perfectly manicured and glittering to match, sparkling under the chandelier lights every time she reached out a hand for some moron to kiss it.

Lust and disgust were a heady combination, twisting in my gut – and throbbing in my cock along with it.

She had to be a Constantine. She reeked of it.

I couldn’t decide whether I wanted to kiss or kill the bitch, but one thing was for certain.

I wanted to take her body.

I wanted to see her hurt. I wanted to hear her cry. I wanted to feel her body fight me as she begged me to stop, even though her pussy was screaming for more.

“Terence Kingsley? I wasn’t expecting to see you here!”

I turned to face the voice at my side and pasted on my finest fake smile.

It was Baron Rawlings, his bloated red face still recognizable under his opera mask. Jesus Christ, even the British aristocracy had flown in for this shit show.

I gripped his sweaty hand and gave it a shake. “Good evening, Baron. A pleasure to see you.”

My false accent was very well practised and delightfully British.

“I loved your latest article,” he told me. “About the Windleys and their investment changes. Excellent research.”

I smirked, more to myself than to him. “Why, thank you. I’m very pleased the National Telegraph opted to print it.”

His nod and back slap told me I was doing a rather good job indeed of being Terence Kingsley. Which was just as well, considering I’d be dead in a blink if anyone knew Lucian Morelli was in the Constantine compound.

I’d personally overseen the guy’s demise the previous fall. It was a bonus that the idiot of a journalist had a whole host of articles waiting for print. Steady releases served to keep people believing he was still alive. What an efficient little moron he’d turned out to be.

Terence Kingsley was quite a talented wordsmith. Such a shame for him that he’d decided to write a story exposing my crimes for the National Telegraph. So long, asshole.

It was another useful bonus that he could have been my twin at a squint, especially at a masked ball like this one. Bravo, Terence. Bravo.

The waitress delivered my mineral water and scurried away again with another thank you, sir, thank you.

I listened to Baron Rawlings’s boring small talk as long as I could stomach it. He blatantly tried to coerce me into writing an article on him and his bullshit heritage. Even Terence Kingsley himself would have rolled his eyes at that one.