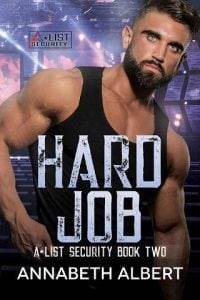 Domestic happiness weirded me out. There. I’d let myself own the thought I’d had all afternoon. I rolled my shoulders, trying to let go of the tension that had plagued me since my arrival at this impromptu pool party. But I must not have been doing a great job relaxing because my brother plopped down on the pool lounger next to me with a concerned expression.

“Are we torturing you that much?” Danny asked. This late-lunch Saturday gathering had been his idea, and I’d agreed to stay in his good graces along with the chance to see my best friend, Cash. Who was now Danny’s boyfriend, a move I still wasn’t used to, and while not torture, the joint invite and cutesy way they finished each other’s sentences made my skin itch in strange places. Not that I could admit that to Danny. I’d spent far too many years disconnected from my half-brother’s life, and I was determined to do a better job as a brother, even if that meant tamping down my discomfort over him and Cash hooking up.

“What?” I wasn’t an actor like Danny, but I could still do a decent job of faking shock. His backyard was lush with summer foliage, and the pool water sparkled in the sunlight. I added an exaggerated blink against the afternoon sun. “Of course not.”

“Liar.” Danny rolled his eyes at me, unconvinced by my wide eyes and upturned hands. “And lucky for you, I’ve got the perfect distraction for your workaholic self.”

“Oh?” I carefully pitched my voice to be inviting. I always seemed to say the wrong thing with Danny, and I wanted to keep the peace, even if that meant speaking less and listening more. “What’s up?”

“A job?” Narrowing my eyes, I sat forward on the lounger, studying him more closely.

“You don’t have to look so suspicious.” Danny had apparently added mind reader to his list of talents. “Nothing to do with me. No new stalker. I’m good, promise. This is a job for your company.”

“You have a job for A-List?” I’d been under the impression that Danny only grudgingly tolerated my security business. We’d bailed him out of a tight spot a few months back, but it was usually Cash, not Danny, who was interested in talking shop with me.

“My friend, Ezra, is in something of a PR nightmare right now.” Danny ended with a flourish of his hand as if he could magic away his superstar singer friend having made major headlines for fans jumping a barrier at one of his concerts.