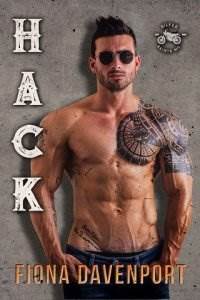 I hadn’t been able to stop thinking about the gorgeous redhead with emerald green eyes since the moment I’d first seen her picture. Paisley Wessex. Her name was as beautiful as she was. Just from looking at her picture, I’d felt desire stir in my body. Her bright green eyes twinkled as she smiled into the camera, and her long, fiery red hair looked perfect for grabbing onto while I fucked her from behind. But beyond the lust I felt, the fact that she was a damsel in distress had my already possessive feelings turning into a fierce need to protect her.

Which was fucking crazy. I’d never even seen her in real life until today.

The second I saw her standing in the open door to her apartment, talking to my MC brother, Dom, and his girl, Lucy, I wanted to rush out of the truck and steal her. Whisk her away to someplace where she was safe, and I wouldn't have to share her. But there was shit going down that needed to be dealt with first. So I wrangled my desire and caveman instincts and shoved them behind a wall of control.

I’d been forced to watch from the sidelines as she put herself on the line to stop a murderous asshole. She’d been intimidated into keeping quiet after watching the little fucker beat the shit out of his girlfriend. We’d asked her to come forward, and it had been hard as hell for me to let her do it.

Then when the punk was dead, I finally gave myself permission to approach Paisley. I almost fucking killed Dom when he held me back. He was right to do it, though, as much as I hated him for it. She’d been through a lot, and it was likely I’d scare the shit out of her with my intense feelings. Besides that, the threat wasn’t completely eliminated.

The little shit Dom had just killed was a murdering son of a bitch who’d gotten away with it too many times due to having a cop for a dad. And not just any cop. A fucking lieutenant who supervised the homicide division. Officer John Clark. But he’d covered up for one of his kid’s crimes for the last time and intimidated his last witness.

We piled into Dom’s truck and took off. “Where to?” he asked.

I rattled off an address, and in less than twenty minutes, we pulled into the parking lot of a police station. I rolled my shoulders, trying to relieve some of the tension as I watched the entrance like a hawk. “Breaker sent him a text from the kid’s phone telling him to meet in the parking lot. He should be walking out any minute,” I informed Dom.

I was right, and a man, who was an older version of the punk Dom had just shot, stalked out the front door. He looked around the lot, probably searching for his kid’s car. His eyes swung in my direction as I climbed out of the cab of the truck. I wasn’t exactly a small guy, so it would have been hard to miss me. But it was practically impossible when Dom, a big ass motherfucker who used to fight in the UFC, got out and stood beside me.

“John Clark.” It was a grunted statement rather than a question.

“Doesn’t matter who we are,” I growled. “What matters is that you listen real fucking hard to what we got to say.”

He narrowed his eyes and scoffed. “I don’t have time for this bullshit—”

“Now, that’s not true,” Dom interrupted him. “You won’t be covering up any more of David’s crimes, so you’ve got plenty of time on your hands.”

He stiffened but tried to play it off as though he was relaxed and dismissive. His eyes even traveled over us and clearly found us lacking. Especially after lingering on our patches. “What are you talking about? That’s ridiculous, and it’s egregious slander. I’ll sue you if you make any allegations that I’ve been anything less than exemplary at my job.”

I rolled my eyes and spoke in a deadpan tone. “Gee, Dom. Those are some big words.”

Dom chuckled darkly. “Guess I need to get out my thee-sor-us. Except I’m pretty sure my fists are bigger than his smart-ass mouth.”

A little more color drained from John’s face, and I nearly grinned as I ambled over to him. I held out a file folder, and when he hesitated, I said, “You’re gonna want to take a look.”

He yanked the folder from my hand and opened it. His face turned ashen as he scanned the documents that contained the proof of his son’s crimes and that he’d covered them up.

He licked his lips and audibly swallowed. “You”—he cleared his throat and tried again—“you couldn’t have gotten this through legal means,” he rasped. “None of this is admissible in court.”