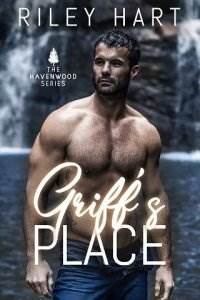 The TV was on, but I wasn’t paying any attention to it. The past few weeks had been… Hell, I wasn’t even sure I had a word for what they had been. It all happened in this whirlwind I still hadn’t caught up with.

My best friend, Chase, and my brother, Kellan, were in love. They’d been sneaking around behind my back. I discovered the truth along with the rest of Havenwood—our hometown.

That was just the beginning of a lot of drama, but it was most of what I focused on. Taking care of Kellan had been my goal his whole damn life. If I was being honest, I would admit I always took on that responsibility when it came to Chase as well, and now they wouldn’t need me anymore. They had each other, and while it had come as a surprise in some ways, it hadn’t in others. I’d been pissed they’d lied, but I was happy for them. I just couldn’t help feeling slightly hurt too.

I frowned at the sound of someone at my door. I wasn’t expecting anyone, and for a moment, I considered ignoring it, but then got annoyed at myself for the thought. I was pouting, feeling sorry for myself because the two people I loved the most in the world were happy? That was fucking bullshit.

So I went over to open the door, only to see Josh, Kellan’s best friend, standing there. His wavy, chocolate-brown hair was a mess like it often was. It looked like he’d run his fingers through it, mussing it and making it stand on end.

“Hey, man. What’s up?” I liked Josh a lot. He was a good guy. The only thing that bothered me about him sometimes was his cavalier attitude toward sex, though I didn’t know why I cared so much. It wasn’t as if it bothered me when our other friends talked about hooking up.

Still, as much as I liked Josh, he and I never hung out just the two of us, so it was a little odd he was there. Maybe if he’d stopped by the bar or arrived before the rest of the crew got there, but he’d never come to the house to see me.

“Not much. I just came over to kidnap you.”

“I’d like to go on a hike, and I was thinking…who can I get to go on a hike with me? Oh, I know, I’ll go drive Griffin Caine crazy because that’s the job of a brother’s best friend.”

He’d never tried to drive me crazy before. Well, not on purpose. He’d never asked to go hiking with me before either. It was one of my favorite activities. I loved being outdoors, but again, it wasn’t something Josh and I did together.

Damned if I didn’t chuckle. The truth was, I needed to get out of the house. I could use some fresh air, so I said, “Come in. Let me get changed.”

Josh nodded and waited while I went to my room for a different pair of jeans and to put on better shoes. A few minutes later, we were climbing into his car and he was driving us away.

“This is a first.” I wasn’t sure why I was mentioning it.

“Eh, there’s always a first for everyone.” Then he waggled his eyebrows, I assumed at the sexual innuendo, and I rolled my eyes.

We chatted about random things over the twenty-minute drive to one of the state parks that had good hiking trails. We parked, and he grabbed a backpack out of the back.

“Shit, I didn’t bring anything.”

“No worries. I got water and snacks and shit like that.”

We started along the trail, and it was slightly awkward at first. We were quiet, and I tried to figure out what to say. But then Josh began talking first, asking me about hiking, and what made me want to open a bar, and pointing out birds along the way. The longer we hiked, the more comfortable I got. The outdoors always had a way of doing that for me.

We stopped at a spot where the trail opened up, near a picnic table. A local craftsman had made a bunch and donated them to the park to give people a place to rest along the trails.

Josh handed me a bottle of water and took one for himself. “You hungry?”

I nodded. There was no denying it was.

Josh picked at the paper on his bottle. “I’m an only child. It never bothered me, but something about you and Kellan made me start wishing I had a brother. I know you guys drove each other crazy, but you would do anything for each other too. That’s special.”