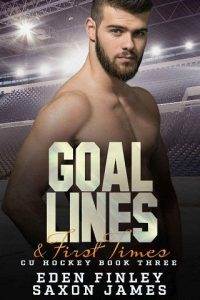 Pick up, pick up.

The summer evening outside the hockey facilities is humid compared to the temperature-controlled rink where I’ve just left my team. Today’s focus was supposed to be on these dumb challenges I set for my teammates, but that switched fast when I blurted out something that apparently raised more questions than it answered. Something I’m sure I won’t live down in a hurry.

I was just trying to be supportive.

I lift my shirt and wipe sweat off my brow while the phone continues to go unanswered.

Come on, Logan, this is kind of a big deal.

Finally, it clicks over, and the voice I grew up with, deeper and huskier than ever before, comes on the line.

“Richard Cohen, as I live and breathe. It’s been a long time. How’s Vermont treating you?”

“Where is this coming from?”

I huff. “Funny story. My teammates were dared to kiss—”

A loud laugh echoes in my ear. “Damn, I really missed out by not going to college, didn’t I?”

I guess that gives me my answer, but I keep talking anyway. I need to know for sure before I walk back into that locker room. “So, yeah, they were being all weird about it, and I’m like ‘Hey, it’s no big deal, it’s just kissing. Everyone does it.’ Turns out, no one does it.”

Logan snorts. “Oh, man. You didn’t tell them what we used to get up to, did you?”

“That we made out? A lot? Yeah, no, I did. Because here I am thinking it was perfectly normal hetero behavior. Learn to kiss by kissing your best friend!” My voice is going all high-pitched and weird, but I can’t stop it.

I hold my breath and wait for a clarification that doesn’t come. “But you’re not.”

“No. I’m not. And yeah, kissing you might have helped me work that out, but it’s not like I was in love with you or anything sad and pathetic like that.”

I burst out laughing. “Wow, thank you for making me feel better, Lo. Someone being in love with me is pathetic?”

“That’s not what I mean, and you know it. We were so close and did everything together. I don’t want you to think it was only because I wanted in your pants. I didn’t, by the way. I mean, I totally would’ve boned you senior year if you offered, but that was for lack of options.”

“This gets better and better.”

“I … I actually can’t believe it has taken this long for it to come up.”

“What can I say, I’m the definition of a dumb jock.”

“It took me”—I count—“six, seven, eight. Eight years to realize the guy I used to make out with might be gay. I’m not smart.”

I can practically hear him shrug. “Dunno. Was worried you might’ve thought I was in love with you or trying to trick you into kissing me? Then you left to play for the juniors and … I guess there wasn’t really any point.”

“Is that why we kinda drifted apart?”

We were inseparable when we were kids. He lived a few doors down from my house in Bar Harbor. We’re opposites in almost every way on the outside—he’s strong and bulky, I’m sleek and agile. He’s the blond-haired, blue-eyed good-looking one, and I was the mousy-brown-haired awkward one with a giant nose. All I can say is, I thanked a God I’m not entirely sure exists when I finally grew into my face. The only similarity between us might be that we both have beards now since I’ve grown mine out. Unless he’s shaved his. I wouldn’t know. It’s been too long since the last time we saw each other.

As opposite as Logan and I were physically, it was as if we shared the same soul on the inside. We only ever differed on one thing—hockey. He hated it. I’ve always loved it.

But even though I thought we had this amazing bond, for me, it never went past friendship—even when we were making out. At least, that’s how I’ve always seen it.

Maybe it was more than friendship, but I was too much of a dumbass to see that.

It’s not like I’ve had many girlfriends. I have hookups, mostly. College hockey players are a wanted commodity. Hell, back when I was playing for the juniors, we had a pool of puck bunnies hoping to score a future NHL star early.

Joke’s on you, ladies, I never ended up making it that far.

“We drifted apart because you moved away. Your focus was hockey, and then when the draft thing didn’t work out, you moved to freaking Vermont. You don’t come home over the summers because of hockey camp, and my family do their annual vacation at Christmas. You’re still my best friend, but we’ve both got our own lives now.”