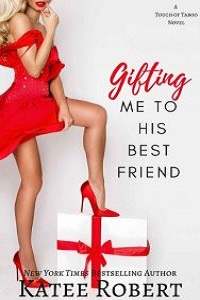 We’re vacationing with Derek for the holidays, just like we do every year. A tradition that I inherited with my marriage to Grayson. Every time Christmas rolls around, it’s an additional a complication I don’t need, a temptation I know better than to even consider. He’s my husband’s best friend. Bromance doesn’t begin to cover it. They’re closer than brothers, close enough that I get jealous sometimes. How can I not when sometimes I catch Grayson looking at him like that?

I stare out the window at the pristine white mountain. Normally, we travel somewhere warm with a beach during the holidays, but Grayson’s been feeling nostalgic for a “real” Christmas with snow and nature, so this year it’s Colorado. He and Derek spent all day skiing, but throwing myself down a mountain and hoping for the best isn’t my idea of a good time, so I bundled up here in our cabin with my e-reader and enough tea to outlast a siege.

The descriptor is laughable. This building, tucked as it is into the slope, is as much a cabin as our penthouse is an apartment. It’s outfitted in high-end appliances, the towering vaulted ceiling is made of real logs, and all the furniture is mountain chic. It’s not a beach resort, but even I can admit that it’s cozy and beautiful.

And I’m doing a poor job of distracting myself.

I watch Grayson and Derek out of the corner of my eye. They couldn’t be more different. Both are white but that’s where the similarities end. Grayson is built lean, courtesy of his hours spent running as he trains for one marathon or another, and he’s got a head of curly black hair. Derek is built bulkier with lighter brown hair and a full beard. Every time I look at him, the word that comes to mind is thick. Add in his penchant for wearing flannel, and he looks like a lumberjack that can rip down trees with his bare hands.

They’ve both showered and changed and are wearing what passes for relaxing clothing. Jeans and a knit sweater for Grayson. Lounge pants and nothing else for Derek. As if he doesn’t care that the lines of his body draw a person’s gaze down, down, down to the faint trail of hair leading from his navel to the drawstring of his pants.

I jerk my eyes to the window again, but the fading light turns it into a mirror, reflecting the living room back to me. I can see myself, curled on the couch with a throw blanket, and the men standing farther back in the kitchen.

My skin gets hot with embarrassment, even though I haven’t technically done anything wrong. “Sorry, I was mentally wandering.”

Grayson comes and leans over the back of the couch to press a kiss to my temple. “Would you like a drink?”

He chuckles at the strength of my response. “Thought so.”

I give in to temptation to twist and watch him walk back to the kitchen. The first thing I noticed about him when we met seven years ago is how nicely he filled out a pair of jeans, and nothing much has changed in the intervening time. Grayson’s ass is biteable.

Derek barks out a laugh. “You sure you want a drink? If Emma was looking at me the way she looks at you, I’d be hauling her back to our bedroom.”

“You’d haul my wife back to your bedroom?” Grayson asks it mildly, and even from here I can see his lips twitch. “Fuck, Derek, tell me how you really feel.”

Derek looks at me. I can’t see the brown starbursts in his hazel eyes from here, but I know they’re there. He’s smiling like this is a joke, but there’s an awareness there in the depths of his eyes. The same one that heats me up on the inside. We’re attracted to each other. We have been since we met at my and Grayson’s wedding. We might joke about it with my good-natured husband, but there’s just enough truth for it to sting.

I wish I had a drink in my hand, because my laugh comes out a little strained. “Don’t I get a say in this?”

“Definitely not.” Grayson grabs a bottle of wine and pours three generous glasses. “You’re my wife, which means my property. I’m pretty sure it says that in the marriage contract.”

I roll my eyes. He might deliver his jokes drily enough for someone who doesn’t know him to take them at face value, but they are jokes. Really terrible jokes. “I knew I should have read the fine print.”

“Your loss, my love.” He returns to the couch with two glasses of wine and sinks down next to me. “You sure you don’t want to come skiing tomorrow? We can take you on the bunny hill.”

I smother a sliver of disappointment that we’ve moved on from the conversation of passing me around. It’s only ever been joking. Grayson and I get freaky in the bedroom, but adding in another person is a fantasy we’ve never actually followed through on. If we did ever go that route, doing it with his best friend would be a terrible idea.