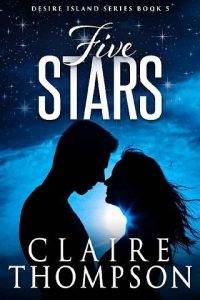 The crowd around the fire pit quieted as Master Ryan approached, Shani’s leash held loosely in his hand. Barefoot, she walked beside him, head held high. The sand was cool beneath her feet, myriad stars sparkling overhead in the night sky. Her gold satin cape billowed behind her in the sea breeze, accentuating rather than covering her nudity.

Fellow staff slave Tommy, also naked save for a codpiece covering his cock and balls and the black leather collar all unowned island slaves wore, waited beside the pit. He had prepared the Kevlar whips and floggers, which were neatly arrayed on the prep table alongside the wet towels, ice bucket and his hand drum.

The crowd parted, whispering and murmuring with unsuppressed excitement as Master Ryan led Shani to the whipping post beside the blazing fire. At a nod from Master Ryan, Tommy removed Shani’s cape from her shoulders and the leash from her slave collar.

Master Ryan greeted the Desire Island guests who had come out to watch and participate in the fire play that evening. As he explained what was going to take place, Shani held out her arms to allow Tommy to bind her wrists together. She sighed with pleasure as the leather cuffs tightened. Her heartbeat quickened as he extended her arms up against the whipping post and clipped the cuffs into place over a large eyebolt.

Master Ryan approached her. He placed a calming hand on her shoulder. “I want you to offer your body to me, slave girl,” he said in a voice designed to carry. “Rest your forehead against the whipping post for balance, feet firmly planted shoulder-width apart, ass out.”

As Shani shifted to obey, he added, “You will remain in that position until released.”

Though she craved the hot, stinging kiss of the fire whipping to come, a shudder of anticipatory fear moved through her body. Despite her complete faith in Master Ryan’s skill with fire play, there was always the very real possibility of being burned.

Acceptance, she reminded herself. You serve the Master. You give yourself freely to him and all Masters on the island. This is your choice. Embrace it.

She closed her eyes, readying herself to accept his gift with submissive grace. A breeze came off the ocean, gently wafting over her skin. She inhaled deeply of its briny tang, letting the peaceful rhythm of the crashing and ebbing waves calm and soothe her.

Master Ryan appeared in front of her. “You ready, Shani?” he asked quietly.

The crowd was silent now, as if holding its collective breath. “Yes, Sir,” she replied, consciously calming her skittering heart. The smooth wood of the whipping post felt good against her forehead. She flexed her hands above her cuffs and pressed her feet firmly into the sand, centering herself both physically and mentally. “I’m ready.”

Master Ryan dipped the prepared head of the wand into the fire. It whooshed to life with a dramatic flair, pulling a gasp from several of the onlookers.

Taking his place behind her, Master Ryan tapped the flaming wand between her shoulder blades. She gasped when the first heat sparked against her flesh. The fire flicked over her back and ass, moving in time to the primal beat of the drum. Ribbons of sensation snaked across her skin, patterning over her in rivulets of flame.

Her eyes were closed. She could hear the “Oohs” and “Ahs” from the audience. It was as if they were watching fireworks, her bare skin the canvas of the dark night sky. The constant movement of the tapping heat relaxed her mind and soothed her soul. She settled into herself, embracing the lick of fire and the soft thump of the wand against her flesh.

All too soon, the wand’s flame burned away and the drumming stopped. Not yet released from her position, Shani remained still, save for the rise and fall of her chest as she worked to get her rapid breathing back under control.

Master Ryan would now move to the Kevlar whip. As he dipped it into the fire, it would draw more cries of excitement and trepidation from the island’s guests. Shani’s skin thrummed with expectation, her inner submissive reserves fully primed.

Just then, the faint whiff of the particular leather balm Adam Hawk used to treat his whips floated in the air. Shani drew in a sharp breath, resisting a very strong urge to turn around and see if, by some miracle, the man himself would appear behind her.