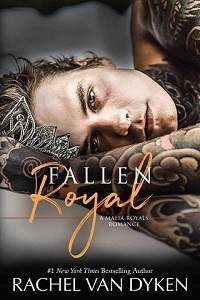 “Deep into that darkness peering, long I stood there, wondering, fearing, doubting, dreaming dreams no mortal ever dared to dream before.” —Edgar Allan Poe

I fell in love with her when it was right. We were throwing mud, she got some in my eyes, and I was convinced that I was going to go blind at eleven. So I chased her.

Also at eleven, I milked my first goat with her.

So did I. Because I was with her because our parents were trying to give us normal in a world where normal wasn’t a word that could ever be used.

My goat at the time decided to strike and kicked me, leaving me running around screaming like a little bitch.

“They’re the devil!” I yelled.

Any girl who could survive a scandal like goat gate was a winner.

But I also knew the rules our parents—the bosses—had given us.

No dating within the Families.

It could potentially cause too much turmoil.

It could cause death.

I tried to stay away from her. Knew my love for her could hurt her, hurt us. I could hurt us.

So, I became what she needed, even what I needed to stay sane.

And then, one day, it all changed. One day I was given a shit choice. I didn’t tell a soul.

I just got on a plane.

I did the job just as her father ordered me to.

And that’s where my story with Izzy Abandonato ends and begins.

I killed for them.

I nearly died for them.

And it wasn’t until that first drop of blood fell that they all realized how good I was at it.

And despite my earlier qualms… it felt good…

My job wasn’t to save lives.

It was to end them.

I just never realized I’d be damned in the process.

You want to know my story?

Then start at the beginning when everything went to shit.

And I killed my own love story with their bullet.

“I don’t think I can do what he’s asking me.” I start to count down from ten and take a deep breath.

Nine. Nikolai, otherwise known as The Doctor to both the Russian and Italian mafia Families, is pacing in front of me.

I use his pacing as a way to even my breathing. I count his steps; I feel better when I count.

Eight. Nikolai holds his Makarov pistol in his right hand. Blood is caked on his fingers.

Maybe in another life I would have counted the splatters.

I didn’t make this choice.

I want to hold her close and tell her I’m sorry. I want to marry her and have a family with her. I want to finish college and get drunk off my ass with the only girl who’s ever held my heart.

The only girl I’ve ever wanted.

Seven. I keep counting. It’s the number of people I’ve been told—not asked—to kill in order to follow in my father’s footsteps.

If I want to take over the Sinacore Family one day, I have to leave behind everything that makes me who I am, Maksim Sinacore, son of both Russian and Italian blood.

“Are you sure about this?” Nikolai sets down his gun and opens a black case. A small vial filled with clear liquid is picked up along with a syringe. “It isn’t exactly FDA approved.”

“I have no choice.” I feel tears at the loss of what should have been and what no longer can be.

I’m outside my body almost.

And fear, in the mafia, makes you hesitate, it makes you a target—I can’t be afraid anymore, but I’m not like my cousins—they tried to make me into a killer, but I’m the guy that hesitates when it comes to punching.

I’m the cousin that prefers libraries to torture chambers.

The guy that saves a spider—always thinking twice about killing and death.

Sometimes I wonder if I was born into the wrong family.

But then I see her, and I’m reminded of all the reasons I have to do whatever it takes to stay by her side—even if it means taking a drug that’s not approved by the FDA. Besides, it’s Nikolai Blazik; he won a fucking Nobel prize at nineteen, along with a dozen kills under his belt.

He’s the only one I can tell.

The only one I can go to.

The only one who can fix the heir to the Sinacore throne.

I have to make him proud.

And I have to earn Izzy Abandonato at all costs.

Four. He fills the syringe.

I close my eyes. “If this goes badly, tell Izzy—”

“None of that shit,” Nikolai says in that calm, emotionless voice of his. “You’ll blend fine.”

Three. Three taps against the syringe.

Two. Two squirts of liquid as he pushes.

One life about to be changed.