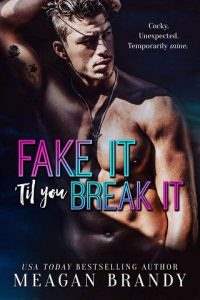 Chemistry, my least favorite subject, but the class I’ve looked forward to the most since school started last week, and even more so today.

Finally, we’re being assigned our lab partners, and I know exactly who mine will be.

Not counting myself, there are only three others left standing, two being uninterested, academically opposed football players while the third is second in our class, also on the team, but possesses the brains and the brawn.

Mr. Brando looks to his paper, ready to announce another pairing, and I can hardly hold in my grin.

I step toward Alex only to freeze, my frown cutting to Mr. Brando, who just read off the wrong name!

“Wait.” I glance from Alex’s tense expression to Nico, already on his way to the lab table. I turn toward Mr. B, keeping my voice low. “Are you sure? Shouldn’t I be with—”

“I’m going to stop you right there, Ms. Davenport,” he cuts me off. “While I asked each of you to list the person you’d prefer as a partner, I gave no guarantees. So, if you are about to make a judgment call on one of your peers, I suggest you don’t finish your thought. I’m aware you’re a bit of a teacher’s pet, however, in my class, you won’t make, nor influence my decisions,” he states scornfully.

My ears heat in both anger and embarrassment, but my hair works as a shield to cover it, my expression giving no sign his words meant a damn thing.

Talk about a judgment call.

“Go, Ms. Davenport. Mr. Sykes is seated and ready to go.” He dismisses me, turning to the last two standing.

Defeated, I head for the back of the classroom where my ‘partner’ has chosen to sit – of course the last space up front wasn’t the one he wanted.

And ready to go? Please! He hasn’t even opened his backpack.

Nico is simply sitting there with his elbows on the tabletop, waiting.

As I approach, he pushes off the cement slab, now lazily leaning against his chair with those eyes, as dark and impassive as always, locked on me.

I stop in front of him. “Guess we’re stuck with each other all year.”

His gaze narrows. “Guess we are.”

When I don’t move, he drapes an arm over the back of my seat, tipping his chin.

“Sit down, D. I don’t bite without permission.”

A heavy sigh leaves me as I walk around, dropping beside him. “Sure you do. Third grade, Ms. Fisher’s class, and I’ve got the scar to prove it.” I flip him off with my ring finger, right where his bite mark was left.

“That’s called leaving my mark. I was smart at eight.”

“Too bad it didn’t carry over to eighteen, huh?”

He only stares, not a word spoken, no sign of a functioning train of thought on his flawless face.

I shake my head, pull out my materials, and set them in front of me.

Mr. Brando makes his way to the front of the room to go over how the class will work now that we’ve been paired up, but I lose track of what he’s saying when I notice Alex’s attention pointed in my direction.

He’s focused on Nico, so I peek over to find Nico hasn’t a clue. Or at least he pretends not to as his face is buried in his phone. When I look back, Alex’s stare slides to mine.

His shoulder lifts in a small shrug, and he nods toward Mr. B as if he doesn’t understand the teacher’s choice either.

For the last two years, he and I have been partners, and it’s worked perfectly. We put in equal time and effort, and the end result is less stress and a perfect grade.

This unpredicted switch, though, means I’ll likely have to pull double hours to make up for what, I’m sure, will be a consistently ill-prepared Nico, but hitting the books harder isn’t even the worst part of this.

Being paired with Nico puts a twist in my plan.

It’s senior year, and I was finally going to bite the bullet and go full schoolgirl mode on Alex, make my interest obvious since he’s never seemed to catch on. Yes, he typically dates the Round Robin girls, the ones who make their way through all the teams in the school depending on the season and don’t care about the commitment side, but still. It could happen.

We’re friends, we run in the same crowd for the most part, and usually go to the same parties. We both want to do well in school and sports and have a good time along the way.

We would work well together.

Alex begins to turn to face forward, but suddenly his glare cuts back to my partner.

In the same second, warm air fans across the hollow of my neck and my body responds to the heat, the knot in my stomach tightening even more when Nico’s unexpected whisper follows.