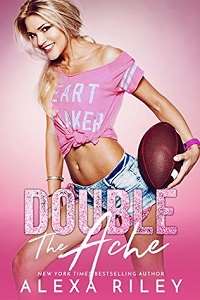 My eyes open at the sound of a deep male voice that’s rich like dark chocolate. Goosebumps break out across my skin and momentarily I forget where I am. I blink a few times and see two enormous men filling all the space in front of me. My heart stops for a second when I realize who it is I’m looking at, then it begins to pound so hard I wonder if they can hear it. They’re both standing over me, so I sit up straight and wipe my mouth in case I was drooling while I slept. Embarrassment floods me and I try to turn away from them so they can’t see it written all over my face. After a second I look back and try to keep my tongue from hanging out of my mouth.

Wes is the bigger of the two and his eyes are hard and unreadable. I glance at Dean, who’s smiling, with mischief in his eyes. After a moment of silence, Dean slaps Wes on the back. “You’re scaring the little thing.”

I stare at both of them, unable to find words. These are two men I’ve dreamed about meeting since they got drafted to the NFL a couple of years ago. Everyone knows who they are and I’ve been dying to meet them since they signed with my dad’s team. I’d been so busy the last few years with college that I never got a chance to fly out and see a game. I knew my dad would have introduced me in a heartbeat if I’d asked. Being super shy was another reason I’d put off going to one of the games. I was worried I’d get tongue tied, which clearly just happened. I can’t believe this is how I’m meeting them. This was not how I’d planned it out in my head. I knew I’d be meeting them soon. Just not this soon.

My hand flies to my hair and I pat it to make sure it’s not a wild mess. I bet I look a slob. I’m going to kill my dad when I see him. Some warning would have been nice.

Dean pushes Wes towards a seat that’s right across from mine, then takes the seat next to him. More players trickle onto the plane, and they throw me questioning glances. I’m sure they’re wondering why I’m here. Coach Barnes gets on the plane with a phone pressed to his ear. He gives me a chin lift of acknowledgement before he goes back to yelling at whoever’s on the line. He’s the only one I know on the team anymore.

My dad told me the team plane would be making a stop in New York on the way back to Vegas, and I needed to be on it. I hadn’t realized he meant it would be stopping to pick up the team from their last game of the season. I’m a dummy for not putting two and two together, but I’ve been running on nothing but caffeine for the last few days getting ready for my move to Vegas.

If I had known, I wouldn’t look like I do at the moment. My eyes drop down to my lap and I curse myself for wearing pink velvet joggers and a loose-fitting crop top sweatshirt that hangs off one shoulder. God knows what my hair looks like right now, and I don’t have a speck of makeup on. Not that I wear a ton to begin with, but if I’d known the two men who star in all of my fantasies were going to be across from me at this very moment, I would have put on a little lip gloss.

When I sneak a peek up at them through my lashes I see they’re both still staring at me. Wes is scowling and Dean is smiling like he’s got a secret. Jesus Christ, how am I going to survive this for six hours?

Someone steps into my line of sight and I look up to see Nelson, one of the team’s star reserves, standing there. His eyes roam over me before a smirk forms on his lips. I’m sure that melts most girls, but my mind is still on two guys in front of me.

“And who might you be?” he asks. His voice is smooth and sweet, and it’s clear he’s flirting with me. Nelson is well known for being a ladies’ man, and every time I see interviews with him he’s always cocky, but funny at the same time.

“She’s none of your fucking business,” I hear Wes growl, and it makes the hairs on my arm stand up.

“Move your ass, Nelson,” Dean adds, and there’s an edge to his voice.

Nelson shakes his head, not even looking at them. His eyes are still on me, but I want him to move, too. He’s blocking my view of Wes and Dean, and though I might not be able to find the words to talk to them at this moment, I want to be able to look.