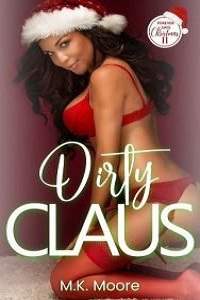 "God, Your Mama, and Me" by Florida Georgia Line ft. Backstreet Boys

I can’t believe the month is half over already. It feels like just yesterday was New Year’s Eve, but I guess time flies when you’re busy as hell. People need Christmas more than ever this year.

“Hello?” I ask as I answer my ringing desk phone. With all the magic floating around this place you’d think a cell phone would work in here, but the workshop is a top-secret facility. No mobile devices at all.

“Son?” I hear my mother’s voice for the first time in a week.

“Frostine will be home tomorrow. She’s going to help Finaelah and Ceallenda around the castle, you know getting things ready.”

“Of course. I look forward to it. Where are you?”

“Key West. About to go on a glass-bottom boat tour. It’s windy on the dock.”

“Sounds fun. I’ll let you go then.” They love going on little adventures together, so I am not surprised about this.

“Goodbye, darling. We love you, see you soon,” she says

“Love you too,” I reply before hanging up.

My parents were the first generation of Clauses that had more than one child and the first to have a daughter. Frosty is fourteen years younger than me and travels the world under the guise of being a fashion photographer, looking for her mate. She still hasn’t found what she’s looking for.

“Naughty. Naughty. Nice. Naughty. Nice. Nice. Nice. Naughty,” I say out loud as I check names off of my list. I finally made it through the Z’s for the second time. Every year I take January off, but I start the damn list in February. It takes me about eleven months to get through the list. Every year it gets smaller and smaller as children stop believing in me, their names disappear. Occasionally, I’ll get a teenager still believing but the list magically cuts off at fifteen so I never know if a true believer is still out there until I meet them.

I have been “Active Santa” for three years now. My parents, Nick F. and Alice, have retired to Florida. Through my father’s blood magic, my human mother’s life span has been altered to match his and they are living the high life on the beach while I freeze my ass off at home. At ninety-seven, I thought I had at least a few more years before this became my whole life. I don’t exactly resent it, but being who I am and doing what I do it’s impossible to meet a woman.

Honestly, that’s the worst thing about being Santa Claus is having to be jolly all the time. Being "on" is hard as hell when you're lonely. I don't know where the hell I'm expected to meet my Mrs. Claus, only that I'm expected to. What I do know is that my fated mate isn't here at the North Pole but I also don't know where she is. Settling down and having children is all I have thought about for years now. At least the last twenty or so, but I had other things to occupy my mind. Sitting in the hot seat really changed my perspective.

"You should really take your own advice, boss," Jensynn, my right-hand man, best friend, and head elf says jarring me from my thoughts. I didn’t realize he’d come into my office.

"And what advice would that be?" I ask wryly.

"Get out there and go find her."

“And where should I go?”

“Throw a dart at a map or something,” he says, shrugging as he leaves my office. He recently returned from a much-needed vacation in Indiana where his fated mate lived. I imagine it’s hard to be immortal without the love of a good woman, but my

Throw a dart? How the hell can I throw a dart to determine my fate like that? Why can I help others but not myself? It used to bother me a lot, but given that I can’t change anything it doesn’t do anything to stress about something like that.

“Aelrie,” I call for my assistant. She’s the oldest elf at the workshop. At four hundred and sixty-two, she doesn’t look a day over twenty. Her mate, Marikoth, is only slightly younger than her, at four hundred fifty-six. They have been mated for over three hundred years. I want that. I need that. My great times six grandpa, Nick A, is still kicking it down in Argentina with my human Gma, so I know that it’s technically possible, I just need to find her.

“Yes, boss?” she asks, coming in through the open door.

“Here is the rest of the list. Get this to processing,” I tell her. She takes the offered papers from my hand and pauses.