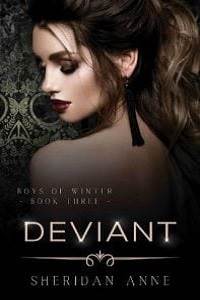 Howling tears through the silence as pressure slams down over my waist.

Familiar hands pull at me, tearing at my clothes, slipping under my head, and wrapping tightly around me as bodies fly into my side. The boys’ knees press into my ribs, my shoulders, my thighs, getting as close as possible and jostling me around.

My eyes flutter open and everything is blurry, but before I can make out the shapes before me, it all goes dark again.

King? Cruz? Maybe it was Grayson. I don’t know. I’m too tired. Too sore.

“GET THAT FUCKING DOG OUT OF HERE.”

The voice inside my head is telling me to scream as the sharp burning tears through me, spreading and throbbing until I can’t remember my own damn name.

“Winter. Open your goddamn eyes.” The voice comes out in a strangled, pissed-off demand that’s filled with pain and emotion, and just like that, I know it’s King. His voice comes from above my head, and his arms are wrapped tightly around me, distracting me from the burning pain shooting through my abdomen.

My body feels heavy and just the thought of trying to get up is exhausting. I just want to sleep. Why won’t they let me sleep?

“Winter, I swear to fucking God, if you don’t open your eyes right fucking now, you and I are going to have problems.”

A heavy groan pulls from deep within me, but I have no idea if they can even hear me. All I know is that if King keeps yelling at me to open my damn eyes, I’m going to stab him with a fork right through his dick.

A hand presses against my thigh, squeezing tight. “Come on, Winter. You can’t pass out yet. Just stay with us until we can get you to the hospital,” Cruz murmurs to my right, the panic in his tone almost enough to shatter every little piece of me. “I swear, once you’re there, I’ll even knock you out myself if you want.”

My head lolls in King’s hand and a pained breath slips from between my lips. “Stop being so dramatic,” I tell them, my voice coming out in a shaky whisper as a bark sounds right beside my face. “I’m fine.”

I hear a scoff from my left, and without needing to look up, I know it’s Grayson. Before I can berate him for his balls of steel to scoff at me while I’m mid bleeding out, he presses harder against my wound and my eyes finally find the strength to fly open. Though they don’t just fly open, they bulge right out of my fucking head. “HOLY MOTHER OF FUCK. THAT HURTS,” I yell as I thrash under the boys’ hold. The agony is so much more than I can bear. “GO SUCK A GIANT DICK, YOU FUCKING TWATBURGER. IT HURTS. STOP. PLEASE STOP.”

My screams quickly turn into heaving sobs as the pain becomes all too much. Too intense ... too threatening. “I have to put pressure on it,” Grayson tells me in his no-bullshit tone, though his distress is coming through loud and clear. He doesn’t want to hurt me any more than necessary, but he’s going to fucking do it if it means saving my stupid ass, no matter what it costs himself to do it. “You’re not bleeding out on me today.”

Cruz and King hold me tight, keeping me still as I try to fight against them, but my energy is quickly wearing thin. I feel the darkness coming back and it scares the shit out of me. “No,” I cry. “Stop. It hurts.”

“Man the fuck up, Ellie,” Grayson tells me, his tone both deeper and darker. “I’d prefer you screaming and hating me than lying dead in your parents’ garage. What would your father say if you just gave up? You’re fighting this whether you want to or not.”

My gaze swivels to find Grayson’s determined stare as the tears fall from my eyes. He’s right. I have to fight this. I never got a chance to know my father, but from what I’ve learned, he’d be pretty fucking pissed if I gave up and let them win.

Dynasty is mine and they’ll never take it from me. Fuck, I don’t even care that I want nothing to do with it, but I’ll do everything it takes to make sure Dynasty doesn’t fall into the hands of the people who would use it to destroy everything good in the world. My grandfather had a vision in mind when he founded Dynasty, and over the years, that vision has turned to shit. I’d sell my fucking soul just to make it what it once was, and I’d do it with a fucking smile on my face if it means ridding Dynasty of fuckfaces like my mother, Preston Scardoni, and every asshole who stands against me.