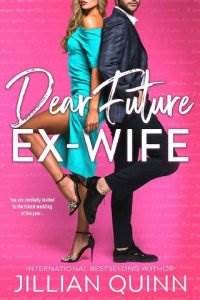 Nathan King is the Devil. There’s no other explanation for why he’s making my life hell. My ex-best friend has a reputation with women, but this is a new low, even for Nate.

My chest tightens at the sight of the pictures, dozens with Nate half-naked and with an unnamed blonde. Blowing on my coffee, I scroll through the email from Callie Bloom. She’s known as The Gossip Queen and writes a weekly column by the same name. Callie is my friend from Philadelphia, and the last person you would ever want to know your business.

My cell phone buzzes across my desk. Callie’s short curly hair and silly expression appear on my screen.

Before I can say hello, she says, “I know you read my email.”

I laugh for the first time this morning, and it feels good. “Yeah, but would you give me a few minutes to read the articles? I was going to call you.”

“Nate really screwed us this time. Look at all of these headlines.” I shake my head as I flip between the websites. “Nate King is a Bad Investment. Titan Tech Rethinking King Deal. Shareholders Dump King Stock.”

“You can fix this,” she assures me.

“How? The future of Queen Takes King is dependent on the deal with Titan Tech. Titan was already suspicious of Nate’s previous escapades. He promised to stay off the radar until after the deal closed. Nate only had to wait one damn week.”

I click through the links to various news outlets. Variety has a nice spread about Nate and his playboy ways. There are pictures of him from multiple angles with the mystery blonde dressed in skimpy black lingerie. In one image, Nate is shirtless, his boxers pushed down by his companion’s hand. Thankfully, this angle doesn’t reveal more than I care to see.

From the looks of the background, they must have been on a balcony in Center City Philadelphia. Skyscrapers and bright lights serve as the backdrop to this disgusting encounter. Nate’s penthouse apartment if I had to guess. After a quick Google search, I find a dozen more articles about Nate. Some of the writers are criticizing our fathers for making a poor choice in executives. Tech Crunch has a quick blurb about how Nate will be the slow death of our family’s cutting-edge technology. I agree with them one hundred percent.

Callie blows air into the phone. “Between you and me, I’m dying to know if you’re the girl from the pictures. You can tell me if you are. You know I won’t say anything.”

I snort at her comment. “Since when does The Gossip Queen know how to keep her mouth shut?”

“Ha! You can tell your bestie the truth. So, you and Nate, did you finally hook up?”

“Of course not!” I’m shocked by her accusation. “I wouldn’t kiss Nate if he was the last man alive.”

Callie cackles so loud it hurts my ear. “Yeah, right. Nate’s the hottest bachelor in the country. You’d jump on his sexy bod in a heartbeat. Unless you don’t have a pulse.” She laughs even louder.

“Never,” I challenge. “You know how I feel about Nate.”

How I feel about him now.

“Why would you think I’m the girl?”

“She looks a lot like you,” Callie points out as if it’s so obvious.

I take a quick peek at the images on my computer. “I don’t think so.”

“But, you could be the girl,” Callie suggests. “And that’s all that matters.”

“What are you getting at?”

“Your company needs to save face right now.”

Callie groans. “C’mon, Harley. How don’t you see it? You could pretend to be the woman. Scandal averted.”

“But your family could lose the company over it.”

I sigh into the receiver, wishing she wasn’t right. My family could lose everything because of this nightmare. Queen Takes King, the tech company our fathers co-founded, is my future as well as Nate’s. At least it was until Nate had to destroy what our fathers built with his stupidity.

“Nate and I can’t stand to be in the same room together. No one would ever believe we were dating.”

“Haven’t I given up enough for this company?” I blow out a deep breath. “Why do I always have to bail them out when they don’t even see me as their equal?”

“Your dad will never see you as his equal,” she counters. “But Nate does. If you scratch his back, he will scratch yours.”

As much as Nate irritates me, he does have some good qualities apart from his looks. He’s a womanizer who has a new model in his bed every night, but he’s always been a supporter of women in executive roles at our company. Of course, my dad would never go for it.