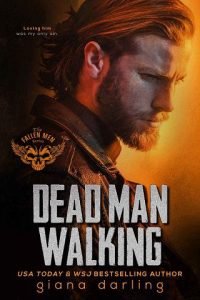 “Wholeness for humans depends on the ability to own their own shadow.”

“Sleeping On The Blacktop” ––Colter Wall

“You Want It Darker” –– Leonard Cohen

“You’re In Love With A Psycho” ––Kasabian

“We Must Be Killers” –– Mikkey Ekko

“I Will Follow You Into The Dark” –– Death Cab for Cutie

“Bring Me Back to Life” –– Ht Bristol, Charlie Bannister, Vincent Steele, Nine One One

“Are You Even Real?” ––James Blake

“No Shade In The Shadow Of The Cross” –– Sufjan Stephens

“The Killer Was A Coward” –– Dermot Kennedy

I was wearing white.

More specifically, I was dressed in the costume of an angel resplendent with feathered wings gracing my shoulders and a silk dress that fluttered above my knees. With my pale gold hair, my small feminine features, and my plush mouth painted pink, Brett had told me I looked descended from heaven.

I didn’t bother to educate him on the irony of my guise. Yes, in most ways, to most people, I was Beatrice Lafayette, lover of all things pink, cute, and girly. I was virginal, by choice, during a time when most girls threw their first time at anyone who handed them a Solo cup of lukewarm beer, and I volunteered my weeks at First Light Church, where my grandfather had been the pastor for decades.

I was good enough to suit the wings.

No one knew the dark heart of me. It was a private secret I harbored inside me, attentive to it only enough to keep it barely alive.

Growing up as I did in the mayor’s mansion, a white wedding topper of a house set in the middle of a relatively sleepy town on the west coast of Canada, I didn’t have cause to experience much violence. We had a cousin, though, who played hockey down in Vancouver, and my mum, wanting to visit her sister but not particularly enjoying her company, often decided to visit during one of Ryker’s games. I loved going to those games, not because I liked the sport or even my aunt very much, but because I loved to watch the fights. They broke out abruptly, little grenades of violence bursting forth on the frosted surface of the arena so suddenly it stole the cold breath from my lungs. There was so much power in the interchange, the vicious strength of seasoned athletes battering each other. It was moving to me in a strange way. I knew my mother noticed my fascination, the way my cheeks pinked from more than just the cold, and how I leaned forward in my seat to be closer to the action.

Even as a child, I was drawn inexplicably to those things opposite of me.

Violence and darkness, immorality and iniquity.

I was a good Christian girl with an obsession for those who sinned.

Which explained, imperfectly, how I felt when my older sister, Loulou, fell in love with an ex-con, outlaw motorcycle club president and in doing so, introduced me to an entire world ripe with deviancy.

The Fallen MC felt more like my home than that mayor’s mansion ever had.

These were people who understood the full spectrum of morality and cut their own rules and uses from it.

I loved the bloodthirsty nature of their revenge because it stemmed like a dark bloom from their deep-rooted loyalty. The way they proudly, staunchly wore their flaws the same way they did their values, daring you to accept nothing less than the full package of who they were.

These men, perfectly imperfect, compelling specimens of the ultimate alpha male who eschewed all judgments that were not his own? These men were my kryptonite and my family.

So was it any wonder I grew to love one of their own?

I didn’t know him well enough for that.

I studied him like one, stalking him as much as I could over the years under the ever-watchful eyes of my blood and biker family, which wasn’t as much as I wanted to but enough to sustain the vague image I had of this man and my yearning for him.