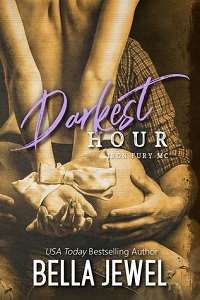 You know how it goes.

Actually, come to think of it, I think it’s probably the most important part of human life. The most crucial. The part that either makes or breaks you.

The moment you take your first breath in this world, the molding begins. Do your parents hold you too much, or too little? Are you over loved? Under loved? Are you spoiled? Forced to work hard? It all defines you. It all creates little pieces of who you’ll become.

Some doctors say the first two years of your life shape you. Those two years create the foundations of your personality, of the person you’ll become as an adult. That’s why it’s so important all the right things are done in those years. If they’re not, does that mean you’ll have no chance of becoming a decent human being? Are you forever ruined by a mere twenty-four months of your life?

My answer is probably yes and no.

I have my reasons for this. One, because I was molded by the worst. By a monster. By the darkest of the dark. The devil himself. Did that make me a bad person? Absolutely. At times, I’ve done things that I can’t even allow myself to think about now for fear they’ll ruin me.

But, also, I believe I’m a good person. I want to help people. I want to be better. I don’t want to be like him. To live the life he tried so hard to fashion me for. So, the complicated answer is yes and no. People are molded from the moment they’re born, but that doesn’t always mean they’ll stay in the messy, ugly shape they’ve been carved into. Sometimes, they’ll run their own hands over the edges, smooth out what’s been damaged, and make themselves almost normal again.

And I’m completely okay with that.

I stare at the cold, green eyes of my father. He can’t see me. But I can see him. He’s standing by the window, on the phone, barking into the mouthpiece. He doesn’t know I’m in here because I’m not supposed to be in here. His office is out of bounds, the one place in the house my mother and I are forbidden to go. So, of course, I came. Curious as to what made it so special, what made it such a dark zone.

I didn’t find anything.

Although, at seven, I can’t really read very well and everything I found was all papers, and computers, and everything I don’t understand or even know how to use. To me, his office seems boring. I wouldn’t want to play in here anyway, so I’m not sure why he would tell me I can’t come in.

But my father isn’t a nice man.

In fact, I don’t think I like him at all.

My friends at school tell me that’s not very nice because he’s my father, and I shouldn’t say things like that about my father.

They don’t know how it feels when he slaps me across the face. My eyes water, and my face stings, and it sometimes makes my nose bleed. But mostly, it makes my mommy cry, and I don’t like to hear her cry. So, I don’t have to like him, I don’t think. I mean, girls at school don’t like the bullies because they’re mean. And that’s what my dad is, a bully.

“What do you mean they’re coming—”

My father yells loudly into the phone but then stops talking and spins around. My head whips around too, because I hear my mother scream. It’s loud, and she sounds really scared. My hands move from their spot on my lap and I go to rush out, but if he knows I’m in here, I’ll never be able to help. So, I tuck myself back behind the big lounge chair that’s hiding me, and I’m quiet. My heart hurts a lot, it feels kind of like it’s going to leap right out of my chest.

Dad’s door swings open, and I peek my head around from behind the chair in the corner and see two big, scary men holding Mommy. She’s crying, and one of them has his hand over her mouth. I start crying too, because they’re hurting her. Why are they hurting her? Mommy isn’t mean, she’s kind and loving. Why isn’t my father doing anything?

My knees are shaking.

“How did you get into my house?”

My father doesn’t ask them to let her go, he isn’t even looking at her. Why isn’t he saving her? In the books Mommy reads me, the prince always saves the princess. So, why isn’t he doing anything?

“Tricked your silly wife here into thinking we were here to fix your broken stove. Stupid woman. You’d think you would have picked someone smarter.”