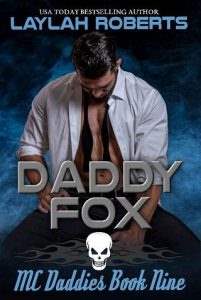 Assassin. Master of disguise. Criminally handsome and smart.
Yep, the Fox had it all.
Except someone to call his own.
But he could make that happen, right? Who wouldn’t want him? He was a total catch.
There were just a few tiny problems.
His life was dangerous. He had enemies. And a job that he had to finish.
He wasn’t entirely sure he knew how to take care of someone else. But surely there was a manual on how to be a good Daddy Dom, right?
Oh, and the woman that he’d decided was his . . . had a boyfriend.
Hold on tight . . . things are about to get interesting.

She was going to die.

It was so darn unfair. What had she even achieved in her short life?

The one time she tried to do something fun, she got herself kidnapped.

That was some terrible luck.

If she’d just stayed home then she wouldn’t currently be tied to this bed, ropes digging into her wrists, waiting for Mr. Creepy Smile to turn up and . . .

Nausea and panic rolled through her as she remembered him touching her with his weirdly smooth hands.

Don’t think about that right now.

If she did, she might vomit. Or cry. And she was already extremely dehydrated. She’d managed to gulp down some water in the bathroom ten minutes ago when the guard had escorted her to the toilet.

Unfortunately, the guard hadn’t appreciated that and slapped her already bruised face.

Don’t think about that either.

That’s what her grandmother had always said. Tears were unsightly. So was anger. Or showing fear.

This was so freaking unfair, though.

She wondered how Brad was doing. Was he worried about her?

Or did he not care?

Even though they’d been dating a year now, they still hadn’t had sex. They didn’t live together. Heck, he spent more time with her best friend, Laura, than he did with her . . .

When she’d been sick the other week, instead of calling her to see if she was doing okay or bringing her soup, he’d text her, telling her to stay away until she was better as he couldn’t afford to catch her germs.

Okay, stop thinking about Brad’s shortcomings. You have worse things to focus on.

“Although, is it really too much to ask that he cares enough to check in when I’m sick? Or get all protective when I walk around late at night? Maybe threaten to put me over his knee?”

“I don’t think that’s too much to ask for at all.”

She let out a screech at the sound of a man’s voice coming from her right. A large hand landed over her mouth. Fear had her freezing.

Who was in here?

Where had he come from?

It didn’t help that the room was pitch black. The only time there was any light was when he was in here or the guards came to get her.

“My bad,” said a masculine voice. “I should have told you not to scream and let the bad guys know I’m here. But you were having such an interesting conversation with yourself. I really don’t think it’s too much to ask at all. I’d happily put you over my knee if you were naughty. Not right now, though. Even I’m not such a terrible person that I’d spank a girl who was tied up. Well, actually . . . that could be quite fun. Under different circumstances.”

What . . . what was happening? Was he a guard or someone else?

When she’d first woken up here, she’d held onto hope. She’d felt sure that she’d be rescued at any time.

That hope had died a quick death.

“If I move my hand, do you promise not to scream? Because if you do, I’m going to have to knock you out. It’s crucial that no one knows I’m here yet.”

She nodded. He moved his hand slowly. She tried to turn her head to look at him. But she couldn’t see a thing through the inky blackness.

Sometimes she thought she’d suffocate in the darkness.

“Are you a cop? How did you get in here?” How come she hadn’t heard him come in? Although she did keep falling in and out of consciousness, so it wasn’t too far-fetched to believe he’d crept in while she’d been passed out.

“A cop?” He let out a quiet huff of laughter. “I’ve never been called that before. Who are you?”

Disappointment filled her. So he wasn’t here to rescue her? Maybe he was here for the other girl. The one she’d heard screaming when she’d first woken up here. She hadn’t heard her in a while, though.