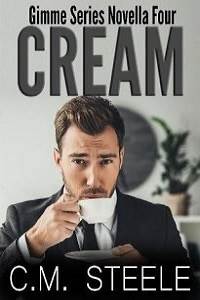 I pull open the door to Brie’s Café & Tea Shop, catching a whiff of strong coffee brewing, waking me up a little. Man, do I really need it. My mouth is practically watering when I smell the muffins, but I have to stay on my budget, so just the coffee will do. I look up at the specials board, and they have any flavor iced coffee on sale for Valentine’s Day. The line is longer than I hoped because of the sale, but after what feels like forever, it’s finally my turn at the register. The girl behind it is pouting at me. I guess I’m taking too long for her or she’s had enough with the surplus of customers because she adds a little sass to her question. “What can I get you?” She’s lucky that I need my caffeine fix, and this is the closest shop, or I’d give her a piece of my mind.

Gaining my manners, I say, “Sorry. I’d like a double mocha iced coffee. No whip cream, please.” I’m not a fan of whip cream at all. A man behind me groans, and I’m not sure why, but damn I never thought I’d be so turned on by the slightest sound. I have no clue what he looks like, but if he’s half as attractive as he sounds, my panties are toast.

“I’ll take her cream.” His deep, rich voice comes from behind me, causing a slight shiver straight down my body, hitting me right in my core. I turn around to tell him he can’t have it, but when I see the six-foot-plus handsome suit in front of me, all I can think is—I’ve got some cream for him. From head to toe, he looks wicked and so smug. Chocolate brown hair with matching facial hair and caramel colored-eyes that scream his devilish intent.

Feeling out of sorts because I’m turned on, I give him my best scowl. “Is that some sort of pick up line?” I’m partially hoping it was. Normally, I’d tell him to go shove it, but I feel the energy between us. It has the potential to explode.

He gives me a crooked smile, adding a new layer of hotness to his already gorgeous face. “I meant the whipped cream, sweetheart. You’re the one whose mind is in the gutter. Besides, I don’t do that, but for you, I’d make that exception.” I’m not sure if he means he doesn’t pick up women or eat them out. Either way, I’m happy to be the exception.

I’m totally mortified that he’s right. My pussy’s drenched and clenched, picturing his scruff scraping my thighs as he licks me clean. “My mind is not in the gutter. And there you go again, turning your charm on me. And I’m not your sweetheart.” He hands the cashier a ten. “Ooh. Don’t pay for my drink. I can do that just fine.” I don’t have much money, but I’m not a charity case.

The cashier ignores me, taking his money for the drinks. “I’m not going to profit from my future wife,” he says. My mouth opens and closes twice before I get my thoughts together to speak. So he owns the place?

“I’m not your future wife.” Does he know that I could sue him for sexual harassment? Or that I might actually take him at his word?

“I beg to differ,” he growls. I bypass him to wait for my drink at the end of the counter, needing to get some space between us before I crawl up his expensive suit and ride him like a cat in heat. It seems my supposed future husband isn’t going to give up and follows me. I don’t even need to see him to feel his presence behind me. Suddenly, my fatigue is gone. Horny—check. Tired—not even a bit.

I move to face him, which is a stupid mistake because I don’t consider how close he’s standing. I end up inches from his body. He leans down so I can confront him better. Damn him and his sexy smile. The fact that he’s disarming me with his charm, I get defensive and bite out, “Do you have a stalking problem?”

“First, this is the line to get my drink. Second, I might just have one if you decide to run.” The seriousness of his words shines through his eyes.

“Do you always get your way?” I challenge, but the fight is already out of my voice. All I want is to melt into him. I wish he’d close the distance and kiss me.

The smug look on his face answers my question before he verbalizes it. “Yes.”

I narrow my eyes at him with my hands on my hips. My movements cause him to look down at my waist. “You’re insufferable. Do you know that?”

“I believe I’ve heard that from my sister at least once or twice.” He reaches out and grabs the iced coffee with a massive amount of whip cream on it. Then he picks up mine and hands it to me, making sure to brush his fingers against mine. To tease me even more, he swipes his smooth tongue over the top of the cup. I can’t stop watching him. A little whimper that I’m grateful no one hears escapes my lip when he does it again. Damn him.