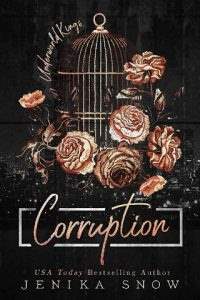 “My father will scold me if he finds out,” I whispered and stared with wide eyes at Kostya.

“Your father won’t do anything but give you a scowl and a tap on the back of your hand,” he said softly, mischief in his voice.

Kostya had this little grin on his face and I couldn’t help but return it.

“You know how spoiled you are,” he whispered and nudged me forward. “No one will care that you took it. Besides, if you get caught I’ll take the blame.” There was a strange softening in his eyes that made my heart do funny things.

I knew he’d take the fall if I got caught. He’d done it more than once, against my wishes, but Kostya was protective of me. And I of him.

Oh, God, this would be the worst thing I’d ever done, and honestly it wasn’t even that bad.

“Come on, milaya moyna.” I looked at Kostya and felt this flutter in my belly every time he said that endearment. My sweet.

He gave me a wink and looked back at the entrance to the kitchen. I followed his line of sight, smelling the baked goods being prepared for dinner tonight.

“Maybe if you just ask Saskia, she’ll give us some treats.” That mischief glinted in Kostya’s eyes and he shook his head.

“Milaya moyna, Saskia keeps her baked goodies locked up tighter than her—”

He was chuckling before I even finished speaking.

I scrunched up my nose, stalling.

“Kostya, I don’t even need a whole pie.”

He puffed out his chest and looked down at me. “I do. Look at how much bigger I am than you. Do you think one slice is going to be enough?”

I made a very unladylike sound but didn’t bother responding. Kostya knew he was massive. He was two years older than me, and even at the tender age of fifteen, he was double the size of boys his age.

So when he said he could eat an entire pie by himself, he wasn’t exaggerating.

I pulled on my bottom lip with my teeth as I looked around the corner into the kitchen. I could see Saskia moving back and forth, our robust cook “imported from Russia,” as my father had said, “because nothing in the States tastes as good or as authentic as stuff back in the old country.”

Saskia had a rather rough-around-the-edges personality, but if she cared about you then it was like heaven came down and blessed you personally. And if you pissed her off? Well, she could flay the skin off of your bones just with a few choice Russian words.

“And why don’t you just do it?” I whispered and glanced at Kostya again. The grin he gave me was extra mischievous this time.

“You and I both know you like the rush of adrenaline and excitement breaking the rules gives.” He shrugged his broad shoulders. “But I don’t mind going in there and snagging a few pies.” As if to make his point, his stomach growled and he placed a big hand on his abdomen and patted it. “Clock’s ticking, princess.”

I internally groaned. He was right. Although I didn’t like getting in trouble, I couldn’t deny that the rush of the prospect of getting caught was an excitement unlike anything I’d ever experienced before.

“How did I know I’d find you here trying to sneak some of Saskia’s treats?”

I recognized the thickly accented voice that came from behind us. We both turned, and I didn’t miss how Kostya moved a step closer to me as we faced Timur, my father’s right-hand man.

Timur’s lips twitched as he noticed how protective Kostya was, and I wanted to remind Kostya that Timur was like an uncle to me. I’d grown up around him, and he’d always been a stable presence in my life.

For a moment we all just stood there in silence, Timur focusing back on me, his expression softening.

“We weren’t doing anything,” Kostya said with hostility in his voice.

I glanced over at him with my brows pulled down and feeling confused. I didn’t understand why he seemed upset all of a sudden.

“Go on. I’ll look the other way. Your secret stays with me.” He gave me a wink before sliding his gaze back to Kostya, all friendly demeanor he’d given me completely vanishing at the snap of a finger.

And then he was gone, turning and moving down the hall and out of sight. But I could still feel the tension coming from Kostya.

“What’s wrong?” He didn’t answer, just shook his head. But I could see on his expression that there was something wrong. “Why did you act like that toward Timur?”

“Sorry,” he finally said. “It’s just one of those days with my father, so I’m on edge.”