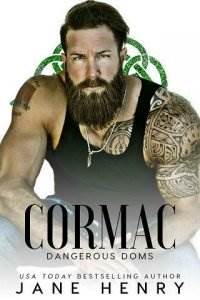 My mouth waters when the bartender places three large, frothy pints of Guinness in front of us. Christ, I need a pint like a newborn calf needs her mother’s titties.

“Anything else I can get you boys?” Rafferty Kelly asks with a ready grin. The oldest son of a dirt poor family of ten, he’s scrapped his way from the dank hovel he grew up in the Midlands to Ballyhock. A stone mason by day and bartender by night, word has it he still supports his mam and the little ones back at home. Rafferty runs a hand through his short, ruddy hair, and folds his arms on his chest. I down my pint in long, thirsty gulps, slam it back down on the counter and give him a chin lift. He grins in approval.

I tap the empty glass. “Another one, lad.” He clucks his tongue and takes my empty pint with a wink. When his back’s turned, I fold a tenner into the tip jar.

“Y’alright, Cormac?” Keenan asks, nursing his pint. His tone’s casual, but I don’t miss the way he drums his fingers on the table, or the ramrod stiffness in his spine. He knows I’ve been wrestling with what I have to do all week. Hell, he was the one that threw the fucking gauntlet.

The door to the pub section of the club swings open, and Nolan ambles in. I snicker to myself as every damn girl in the pub takes note. One girl tosses her hair back, and another straightens her shoulders to show off her tits. One even takes out a golden tube of lipstick and smears red on her pouty lips. Some whisper and point, and one even walks his way, but he walks past her without a second glance.

He walks past each of them and stalks straight toward us. Rafferty wordlessly slides a pint of Rock Shandy in front of him, the yellowish orange drink good enough without a drop of alcohol. A year ago Nolan would’ve have scoffed at a virgin drink and called the manhood of any bloke who drank one into question, but now, Nolan doesn’t even flinch. I’m proud of him. He’s been nearly a year sober, and it’s only been in recent weeks he’s even come near a bar. Takes fucking bollox to face your weaknesses and stay strong.

“What’s the story, brother?” I ask him, tapping my pint to his in greeting.

He swigs his drink before speaking, places it on the bar top, and sighs.

“Christ, but it feels good to be back here.”

Nolan was the first of the McCarthy brothers to frequent The Craic, the dual-purpose club now under new management and aptly named.

Rafferty wipes the counter in front of Nolan and nods. “Good to have you back.”

Nolan was the one who recruited us all here to begin with. Beyond the bar is a members-only exclusive section of the club, reserved for those who’ve got what Nolan calls, “tastes of a particular nature.” In Ireland, we hide our sex clubs well. I suppose we have to reconcile the ghosts of our Christian forefathers by keeping up appearances, or some such shite. But we have our demons, too, behind closed doors.

Keenan looks to Nolan with concern. He knows how Nolan’s bout with alcoholism nearly destroyed him, and as the older McCarthy brother and Clan Chief, it’s his job to be sure Nolan’s alright.

“All good, lads,” Nolan says with his signature grin. “I figure now that I’ve got control of myself, time to control some tits and arse.”

I snort, and even Keenan’s lips tip up.

“Sounds about right,” he approves. “You’re heading to the back, then.”

“Aye.” Nolan takes another long pull from his drink.

“Any word on the bitch you’re trackin’?” Keenan asks.

Keenan assigned Nolan to tag the nosy reporter who’s had her head up our arses, and it seems he’s making headway with her.

“She’s hot onto the Martins, it seems,” Nolan says.

“Will you need to teach her a lesson?” Keenan quirks a brow, his pint to his lips.

Nolan grins, his voice lowering an octave to a lust-filled groan. “Christ, brother, I hope so.”

I laugh out loud. I know exactly what he means.

Keenan shakes his head, but he smiles, his eyes crinkling around the edges, and for one moment, my heart squeezes. God but he looks like my father when he smiles like that. Seamus McCarthy, father to the three of us, has been dead now for nearly a year. He was a hard-headed son of a bitch, but a loyal man. I wouldn’t be the man I am today if it hadn’t been for him.