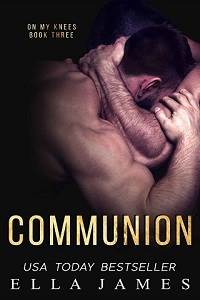 Sky’s not sleeping. I can tell because his hard calf, wedged between my not-quite-as-hard ones, isn’t resting heavy on me just yet. He’ll let me pull him close and fold him up against me, and we’ll get all tangled up the way we like. But he doesn’t relax his body fully until he’s tugged down into deep sleep. Pretty funny because he…what? Thinks the full weight of his limbs would break me?

This is who he is, though: always worrying and pre-thinking. Trying to make things go as smoothly as they can.

I brush my lips over his shampoo-scented blond hair, flex my biceps so my grip on his back tightens. He’s got his head bowed so his forehead is pressed to the base of my throat. I tuck my chin atop it, feeling his warm cheek on my collarbone.

Maybe if this were a one-night stand, like that first night we had together on Sea 3PO, I would think McD was nearly asleep. As it is, I feel the tension in him. It’s in his back and shoulders, in the way his strong arm, wrapped around my upper back, is holding me—a little rigid, like he’s trying to make sure nothing—not even a little bit of air—can get between us.

“Hey…” I run my fingers through his hair. “You want another one?”

He shakes his head, and I’m not surprised. He’s already had two melatonins.

There’s an exhale. He shifts his weight so that he’s burrowed even closer into my chest.

“It’s gonna be okay tomorrow,” I whisper. “Pearl and them, they’ve got it covered…”

In the past few weeks, while we were in the Caymans, Pearl and all her minions talked to the entire staff in Evermore’s largest administrative building, making sure everyone in Luke’s sphere is accepting and supportive—so he won’t ever be confronted by a bigot at work.

Pearl pitched it as “ensuring that the head pastor is never disrespected.” That’s a pill that Sky could swallow. The real worry, of course—at least on the Evermore end of things—is that Luke’s return to pastoring will be met with hostility, and he’ll leave.

He made the place what it is today, and before him, his dad and grandfather did. He shouldn’t have to leave it just because he’s with me. But that’s what’s at stake if this shit doesn’t work out.

My heart gets racing thinking about the many possibilities—including that another lunatic comes at one of us—and now my lungs are screaming for air. I swallow slowly and breathe through my nose until they don’t feel as tight.

We keep some THC/CBD cream on the bedside table. It’s got a little menthol tingle, but somehow they made it smell like lavender. I disentangle from Sky, reaching for the little pot.

“Roll over on your stomach, Sky babe…”

He does as I say, and I straddle his ass, rubbing his neck and his shoulders till my arms ache and my dick is jutting up and out. I don’t think my massage helps—at least not with putting him to sleep. He keeps shifting like he’s got a boner.

I move off him, smirking.

“Thank you,” he says quietly.

“Roll onto your back, Sky.”

After a moment, he does. It’s dark, but we’ve been lying here for almost an hour, so my eyes have adjusted enough for me to see the way his lips twist in a crooked little not-quite-smile.

“Don’t tell me you want more of this.” He wraps his hand around that big dick. It’s as hard as I figured, which makes me grin.

I give him a slow, firm stroke, tickling my fingertips over his cockhead and thumbing that soft notch below its flanged rim, making his hips jerk.

“I can tell that it would be a problem if I did—want more,” I murmur. “Clearly, the last thing you want is to push this dick into me.” I swallow as my own cock gives a hard throb.

“I want to live in you,” he says, draping one arm over his face.

This is morose Sky. He’s been like this since dinner. Not exactly moping, but he just seems heavy. Good thing for him, I know how to fix that.

I straddle his thighs and take both of us in my hands, squeezing us together as well as I can; we’re too much girth for me to get a good grip on. Sky moans, lifting his hips as I stroke from base to tip, with extra focus on his thick tip. Then I let his cock go, smirking as it bobs above his abs.

“But…you know…it’s bedtime. So we probably shouldn’t…” I shrug.

Then I reach for the weed cream, arching a brow as my gaze holds his. I dip my fingertip into the little pot and rub some of the stuff behind his balls. Sky makes a hoarse sound, looking like some large, felled animal with his throat bared and his head tipped back against the pillows.