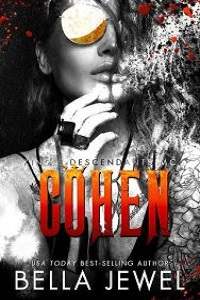 I’m trembling as I stare at the utter horror that has been left behind in my home. I’m not supposed to be here, but I couldn’t not come back and see again, like the first time wasn’t enough.

Every single god damned one.

They’re all gone. My brothers. My father. Their lifeless bodies lie on the floor, blood trickling from their mouths, soaking into the floor, forever haunting my memories with the absolute hell that biker club just brought into my life.

I’m too afraid to move, scared that if I do, everything will come crashing down around me and I’ll be forever stuck here with them and their bloodied bodies. I can’t seem to look away, even though I know the best thing would be for me to call the police and be done with this. I stare at my brother Rory’s gaping head. He has been shot right in the forehead, and the mess it left behind is something I’ll never forget.

My father and other brother, Manny, have had their throats slit. Wide gaping wounds, their eyes staring blankly at the ceiling. I grasp at my throat, and I know I have to get out of here. I have to go and never come back. The club that did this, I thought they were good ... I thought he was good. I’ve known Cohen for a long time, and I never thought he’d hurt my family, I never thought he’d leave me with nothing, I never thought, even for a single second, that he’d take everything from me.

I’ve seen too much.

I know too much.

I finally get my feet to move, and I walk over to the safe, the safe where my father kept everything important. Whatever he was up to, this safe holds the key. I punch in a few codes, and pain crashes into my chest when I realize the code is my birthday. Never in a million years did I think he’d use anything to do with me. My father doesn’t love me, at least, that’s what I believed. Now, I’m not so sure. I pull the safe open and stare at the contents inside. There are a heap of papers, some photos, and a few guns. There is also a good load of cash, probably tens of thousands.

My heart leaps into my throat.

I scoop it all out and turn.

I pause, and my heart jumps into my throat as I see Cohen standing in the doorway, staring at me.

“Are you here to finish the job?” I whisper.

“No,” he growls, low. “You’re going to give me everything you have there, and then you’re going to disappear. Do you understand me?”

My hands are trembling, even though they’re full of the contents from the safe. I’m glad Cohen can’t see how scared I am.

“I thought we were friends,” I whisper. “You took my entire family, and now you want the last of what I have left?”

“We are friends, which is exactly why I’ve got to do this. What you have there is not somethin’ you will be safe havin’. If you leave, and you’ve got it, you’ll be hunted.”

What could it possibly be?

What could Cohen want that is so dangerous?

I stare at the bundle in my hands, and Cohen takes a step closer. “Give it to me and get the hell out of here. Never come back. You come back, you’ll die. Your family is incredibly dangerous, and you’re not safe.”

“You killed them all!” I scream, gripping the sides of my head and shaking it, eyes clenched shut. “I trusted you, Cohen. I ... I thought ...”

My eyes pop open to see him taking a step forward, pulling a needle from his pocket. Realization of what he’s going to do hits me hard, and I take a frantic step backward. “I care about you, so much, which is why I don’t want to have to do this, Aviana, but I will.”

His eyes harden and he shakes his head, his voice bitter when he growls, “You’re not family. You’re a means to an end. We got what we needed. Now, you need to leave.”