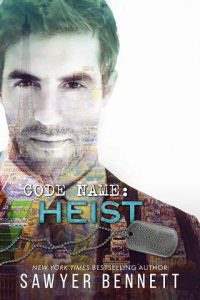 “Another round,” Cage yells to the waitress as she passes by our table.

“You can’t be done,” I laugh, clapping my hand on his shoulder and grinning at Cage who sits on the other side. “This is a rite of passage. Tradition. You’re a newbie. It’s mandatory to get drunk as part of the welcoming process.”

“Yeah?” Dozer asks, his dark eyes narrowing. “Then how come Jimmy and Malik aren’t getting drunk? They’re as new as I am.”

Jimmy Tate sits beside his wife, Anna, who is the only one of us not drinking tonight. He has his arm around her shoulder, whispering something in her ear that has her eyes sparkling. Jimmy joined Jameson about a month ago, coming straight out of an enlistment as an Army Ranger. It was a good move for them as Anna’s pregnant with their first child. She’s from western Pennsylvania originally, and she wanted to be closer to her family.

Malik Fournier sits next to Anna with Cruce on the other side. He’s talking with animated hands, telling a story to Cruce and Barrett. Jameson hired Malik a while back, but he’d only recently started. He’s a former Marine, like I am. So far, his claim to fame is that two of his brothers play professional hockey for the Carolina Cold Fury.

I look back to Dozer. “Malik and Jimmy are as new, but since they’re leaving tomorrow on a highly classified, incredibly dangerous mission, it’s probably best they’re not puking their guts up.”

Dozer nods, giving me a dazzling grin. “Fair enough. And since I am a good and loyal teammate, I’ll drink their shots.”

“That’s my boy,” Cage whoops, slapping Dozer on the back. “He’s not a quitter.”

Laughing, I take a sip of my beer. This feels good… being among my teammates for an evening out to celebrate new friends and say farewell to others. Malik and Jimmy are headed out tomorrow, along with Merritt Gables, Tank Richardson, and Sal Mezzina from the Vegas office.

I wasn’t blowing smoke up Dozer’s ass either. It’s a black-op mission. Sometimes, we are hired by our government, and the missions can be dangerous. While these men are fairly new in my life and we’re just getting to know each other, we’re now brothers of sorts, so I feel a modicum of worry for them. It’s not so secretive we haven’t been filled in on the details, but it’s delicate enough it doesn’t go any further than our company.

Jameson will work in conjunction with an international rescue team, which will go in to try to recover a few relief workers taken hostage in Syria. Our guys will work with some off-the-books teams from the United Kingdom and Australia.

I don’t pretend to understand the internal dynamics of our government, but it was somewhat of a surprise when I accepted the job with Jameson Force Security to learn we’re often hired to perform military operations instead of sending in the actual military. Something to do with budgetary constraints and political ramifications, but in essence… we’re often sent in when it’s not affordable for the military defense budget to be tapped or our government cannot be associated with a certain type of mission.

Regardless, our guys will be dropped in a hotbed of hostility to rescue hostages, despite our country’s clear policy of “we don’t negotiate with terrorists or hostage-takers”. It makes me uneasy and worried for my friends.

“Saint,” Malik calls, breaking into my thoughts. “Is it true?”

“Is what true?” I ask. This is the first opportunity we’ve had to go out with Malik and Jimmy since they joined a few weeks ago. We’d been a bit sidetracked with the Cruce and Barrett situation—saving Barrett from a maniac who was trying to kidnap her.

Malik leans forward, placing his arms on the table. His expression is one of extreme interest and excitement. “Cruce says you used to be a world-class thief before joining Jameson.”

Everyone goes silent, all eyes on me. We’re a new team, and we’re still figuring each other out. Kynan hasn’t told anyone my background, but I’m not embarrassed by it. However, Cruce knows because I filled him in one night after too many beers.

Chuckling, I nod—affirming the rumor he’d heard. “And before that, I was in the Marine Corps, same as you.”

Malik whistles low in appreciation. “No, shit? Man, that is way too cool. I bet you have some amazing stories.”

“Most would land me in prison,” I say slyly. “Which is why I’ll never share them.”

“I get it,” Malik replies, holding his hands up.

The waitress appears with a tray loaded with shots of tequila, lime wedges, and a saltshaker. As she unloads everything, Cage points at me. “Give that man the bill. He’s apparently loaded.”

Oh, such a young pup who doesn’t have a clue as to the reasons people do horrible things.