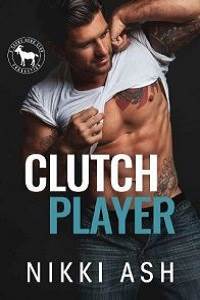 I turn around and find Landon Maxwell bouncing a basketball behind me. When I give him a brow up, silently indicating to quit it, he raises his own and continues to bounce the ball.

“Can you please stop that?” I ask, my voice dripping with false sweetness. “It’s annoying.” I move forward a couple steps in line and Landon laughs, making it a point to bounce the ball extra hard.

I smack the ball out of his hand. It hits the ground and rolls several feet away. Landon glances at the ball, then his hazel eyes meet mine, and a smirk splays across his cocky lips.

“Harper,” my best friend, Melissa, calls out, her scrutinizing gaze darting between Landon and me for a brief moment. “What do you want to eat?”

As I step up to order, an arm slings around my shoulders, and Richie Bennett, my boyfriend of seven months, kisses my cheek. “We’ll take a number two with a large Coke,” he tells the cashier, not even bothering to ask me what I want. He does this shit all the time and it aggravates the hell out of me. Pulling his wallet out of his back pocket, he hands her a ten-dollar bill.

“I wanted an Oreo McFlurry,” I grumble. Richie ignores me as he steps to the side and messes around on his phone. This isn’t the eighteen hundreds. I have wants and the right to express them. Especially when it comes to the deliciousness of an Oreo McFlurry: vanilla ice cream mixed with crushed Oreos. Mmm… so simple, yet so good. I consider getting back in line to get one myself, but when I look back, the line looks to be about fifteen people deep.

Once our number is called, he grabs the tray and we have a seat at one of the big tables where a bunch of our other friends are already sitting.

“Are you guys playing a game after?” Melissa asks Richie as she drops her tray onto the table next to him. I refrain from rolling my eyes at her question. She already knows they’re playing a game. They play one every Sunday. During basketball season, they play basketball. During baseball season, they play baseball. Since basketball just ended, and baseball is about to start, they’ll be playing baseball. It’s like she needs an excuse to talk to him. Sometimes I seriously wonder how faithful of a friend she is. I watch her cross boundaries with everyone around us and wonder if she would ever cross them with me. I would like to think she wouldn’t go there, but a small part of me questions if Melissa even knows what the word loyalty means.

“Yeah, we have to get ready for the upcoming season,” Richie says, shoving a bunch of fries into his mouth. “Practice starts this week.”

I reach for the drink Richie and I are sharing and accidently knock it over. The dark liquid runs across the table and everyone lifts their phones as they jump out of the way so they don’t get hit.

I quickly grab the cup, tipping it upright. “Sorry… Sorry!” I tell everyone, searching for some napkins.

“Jesus, Harper! It’s like you’re a child,” Richie chides, throwing me some napkins. “For your birthday, I should buy you one of those spill-proof sippy cups.”

Everyone at the table laughs at his joke while I clean up the mess. This isn’t the first time he’s made a comment like that. He’s known I’m accident prone since he met me and it drives him nuts. It’s not like I drop and spill things on purpose. It just happens… a lot.

“I think I’m going to go home,” I tell him once I’ve finished cleaning the mess and have thrown the saturated napkins into the garbage. “I have a project due tomorrow, and my mom will kill me if I don’t get it done.” And if I’m honest, I don’t even want to hang out with him anymore. For a guy who supposedly cares about me, he sure has a hard time acting like it sometimes—hell, lately, it feels like most of the time.

“Just do it tomorrow during lunch like you always do,” Richie says. “I need my favorite cheerleader there to cheer us on.” He smiles at me like he didn’t just call me a child thirty seconds ago, and I grind my molars so I don’t snap at him. Hot and cold. Hot and cold. It’s always like that with him. One minute, he’s sweet and the next, he’s an ass. The sweet used to overpower the ass. Now, I’m not so sure.

“If you don’t want to go, I can cheer them on for the both of us,” Melissa says with a wink.

I glare her way, taking a bite of my burger before dropping it back onto the wrapper. I’m not even that hungry. All I really wanted was a damn—