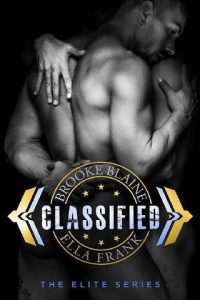 FROM THE MOMENT I’d entered the convention center, where the Navy Ball was being held, I felt sick to my stomach. Actually, strike that. From the moment I’d gotten into the limo with Houdini and the others and caught sight of Solo watching us drive away, I knew in my gut that I had made the wrong decision. The further away I got from Solo, the more agitated I became, but it wasn’t until we all made our way inside the lobby of the convention center that I knew there was no way I could go on pretending everything was okay. That I wasn’t dying inside.

As the others headed toward the main hall, I could only slink into the shadows and wait. It felt like forever, but then…I saw him.

Solo trailed the group of fellow trainees he’d ridden with, looking every bit as unenthusiastic as I felt about having to go inside, but damn he looked gorgeous. I couldn’t take my eyes off him. His tanned skin paired perfectly with the brilliant, crisp dress whites his leanly muscled body filled out so well, and he walked with a confidence I knew wasn’t faked.

Look at me, I willed him. Turn around. Don’t go without me.

As if I’d said the words out loud, Solo looked over his shoulder, and those whiskey-colored eyes widened slightly.

Damn. If I’d thought he’d looked good from behind, it had nothing on the perfect vision he made as he walked toward me.

I licked my lower lip and fidgeted with the hat in my hands, and when he stopped a couple of feet away, I told him exactly what I thought.

“So do you.” Solo tried for a smile, but it didn’t reach his eyes. “Good enough to eat.”

I knew he was trying for a bit of levity, but I couldn’t make myself see the humor in the situation right now.

“Hey,” he said, taking a step toward me, though he still kept himself at a distance. “What’s going on? How come you’re out here instead of in there?”

I could tell immediately that Solo had taken my words the wrong way, because a shadow of fear entered his eyes.

“I can’t pretend anymore.” I took in an unsteady breath. “I can’t go in there pretending.”

“You know what, Mateo. I can’t go in there and lie and tell people I couldn’t find a date when the person I want by my side is standing right in front of me.”

Solo’s entire body went still. So still that I wasn’t even sure he was breathing, and shit, that couldn’t be a good sign.

Oh God, why did I say that, when he obviously didn’t—

Three words, ones I knew had the power to change everything, but what if it was worth it? What if we were worth it?

I kept my gaze steady on him, showing him I wasn’t afraid. “I know.”

Solo took another step toward me, and then he did something I didn’t expect.

He held out his hand.

I swallowed hard, looking from his hand back up to his face, to that sly half-grin, and then he winked at me. “Do you trust me?”

If you had told me weeks ago that I’d choose to put my life and the fate of my career in Solo’s hands, I would’ve said you were crazy. But now, nothing had ever felt so right.

His eyes widened slightly as I put my hand in his, like he wasn’t expecting me to so readily agree. That he hadn’t expected me to jump when he jumped. But this was exactly where I wanted to be. It was where I’d wanted to be from the moment I’d shut the door of the limousine and driven away from this man, and nothing would stop me from taking this next step.

“I trust you. The question is, do you trust yourself?”

Solo’s fingers tightened around mine, and then he tugged me toward him and gave a slight nod.

The vulnerability in his voice made my heart thump a little harder. Solo might be out and proud, and appear as though he didn’t give two shits about anyone else’s opinion. But I was well aware that ninety percent of that bravado was a front, a show he put on for those around him, and knowing he was just as apprehensive about walking through those doors made my confidence resurface.

“Then that’s all we need, right? Each other?” I knew I was putting it all out there. I was placing not only my trust but my emotions in this man’s hands, and when Solo’s lips curved into that sensual smile I loved, my knees nearly fell out from under me.

Damn. Those dress whites, that smile, and the implication lacing Solo’s words made my cock stand up and pay attention. Not exactly the best position to find myself in, especially since this uniform was fitted in all the right ways.