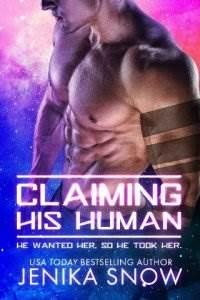 Thirty years ago a race of humanoid aliens known as the Rogues came to Earth in search of conquest and colonization. With the Rogues home planet dwindling in resources, and their males outnumbering the females, it was imperative that they find a new home to make their own.

That’s the only thing that mattered.

It wasn’t until they landed they realized the inhabitants of Earth, a small, weak and inferior species, were actually very hostile, resorting to violence immediately upon the Rogues’ landing. They fought, but they wouldn’t win.

It didn’t take long for the humans to realize they were no match for the bigger, more intelligent, and technologically superior beings. The Rogues were bred to be warriors, enforcers of their kind, and because their own planet was diminishing in resources, and their males outnumbered the females, conquering the planet was imperative.

But when the Rogues had originally planned on destroying every last human, they realized the weaker species could be used in many ways.

As the years progressed the Rogues found out the humans could breed with their own kind, producing offspring that carried more Rogue genetics than human. The effect was a being superior to humans, but still weakened because of the lesser species’ genes. If the Rogues wanted to successfully stay on the planet they’d need to take the human females and breed with them in order to increase their population. Viable, fertile human females are used as breeding stock, caretakers for the half-breed children, and as concubines for the warriors.

But there are small groups of humans in hiding, and it’s the hunters and trackers of the Rogues that are dispatched to find them. They must kill the males that are not of use for labor, and capture the fertile females for the breeding stock.

This is the world of the Rogues now, and anything inferior and weaker will be destroyed.

Greta stared at the stone ceiling above her, the scent of sweat, the sound of coughing, shuffling, and of deep breathing her atmosphere. Now twenty-one, she had been born when the Rogues had already conquered Earth. She’d known nothing different from the world before her.

Humans no longer were superior, but then again she’d never known a world, a life, where humans had freedom, weren’t used for labor, sex, or as breeders for the monstrously large and dangerously volatile beings that had taken over their planet.

Greta had heard stories from some of the elders, the ones that were near death from old age, but had been around before the Rogues first came to Earth. There weren’t many elders in hiding anymore, but Greta knew that hiding from the very creatures intent on taking away humanity, civilization, and destroying everything in their wake, even if she had to live in a cave, was better than living in subjugation to the Rogues.

She did wish she’d been around when humans had ruled Earth, had seen the technology that had changed and shaped the world. Now they were living primitively, so isolated and in the dirt that it was like they lived millions of years ago.

She sat up, and tried to not wake the three people surrounding her. The sounds of huffing, moaning, and of clothing being shuffled around had her looking over to the side, even though she knew what she’d see. Two people were engaged in sex, the man over the woman, her legs spread wide. This was what Greta’s life was, had always been, and she’d never known any different.

The humans cramped in this cave deep in the bowels of a mountain were the only people she’d ever known. Ryeccu, one of the elders, was nearing eighty. He had lost his wife during the winter months, and she knew his loss and sadness from losing her would take him soon. He hardly ate as it was anymore, and to see that kind of sadness over losing someone so loved ate away at them, and had her feeling for the older man.

Then there were Thindle and Frenna, a husband and wife that were expecting their first baby. Since living with this camp of humans in this mountain she’d seen three live births, helped in all of them, and also seen the devastation of two infant deaths. To say that experience ate away at a person was an understatement.

“Greta, you must sleep.”

She looked over at Jayce. He’d been with her since she was sixteen, watching over her, protecting her. He was older than she was, maybe in his thirties, although he wasn’t sure, as was many of the people here. Time just seemed to stand still, to stop when in hiding. But Greta knew her day of birth was always when the leaves started growing on the trees.

He ran his hand over the pallet beside him, and she rested down again, facing him. She saw Jayce as a brother, but she knew he loved her, wanted her as his woman. And even if she should have been with him, because being surrounded by people yet still being alone was bad, she couldn’t be with him without emotions. Having a relationship with Jayce that consisted of them being physical, sexual, wasn’t something Greta wanted to think of, wasn’t something she could do.