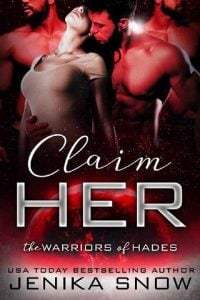 Rylan curled his lip in disgust at the sight before him. Never had he imagined stepping foot in an intergalactic auction, but desperate times and all that bullshit.

He stood amongst the beings who had come here tonight for the sole purpose of purchasing a female for himself and his twin brothers.

The stench of decay, waste, and blood mingled around him, but he was used to such aromas. His black Mora-skin duster and hood made who and what he was a mystery to all around, but that didn’t mean they couldn’t tell the creature he was just from his very presence.

They were on his planet, after all. At least they were smart enough to give him, a Warrior of Hades, a wide berth. A few feet before him was a raised steel platform that would soon hold several females from all over the galaxy. It was the breeding season for several species, his included, and the need to find a female he could bring back to his brothers drove him hard.

This season, the auction was being held on their home planet, Hades, and it couldn’t have come at a better time. With no females being born of his kind, and no females wanting to willingly live on the planet known as hell itself, the males had to acquire their mates from other planets, or in this case from the intergalactic auction.

His brothers, Zarek and Soran, were in need of a female to mate with, to breed and claim, as much as Rylan was. At a younger age, finding females to be with sexually had been easy enough, because he and his brothers had been on off-world missions. But now that their need to breed rode them hard, they wanted a stable and permanent female to share, and that was what Rylan intended to obtain today. His younger twin brothers had stayed back, preparing their home for their soon-to-be mate.

Maybe purchasing a female wasn’t the noblest way of finding a mate, but he told himself he was saving her, taking her away from a fate that could very well be worse than death. Him and his brothers would cherish her, protect her with their lives, and make sure she was always happy.

She would be their everything, and their devotion to their mate would surpass anything else. She’d be their priority along with the offspring she gifted them.

Keeping his head lowered, he scanned the small, packed room. These auctions were held in many places, each one erected for only a night’s time. Since they were on his home planet, they’d had to make some moderations to one of the outcroppings of a mountain farthest away from the lava rivers. The place had industrial-sized vents that blew arctic air, making sure to keep anyone unaccustomed to the higher temperatures of Hades more comfortable when the bidding began.

Rylan could smell the females just behind the thin cloth that separated them from the heathens waiting to pay the highest amount to pump them full of their seed. Even thinking about it had his already raging arousal slamming into him with even more force. Once the breeding need hit the Hades warriors, they craved to find a female, mate with her, and claim her so all others would know she was theirs.

There had been males who hadn’t found a female, and a darkness had overtaken them. Over time, they would become irrational, and an almost evil entity would take over them, controlling their need for blood and violence. Although the Hades warriors were already violent and bloodthirsty, needing to fight to let off their aggression, when a male didn’t breed, it became even worse.

They would have no rational thought, no need but to kill, ravage, and take what they wanted. They were, in all actuality, beasts within humanoid skin, created for destruction and violence. But when the darkness took over, they were truly the demons that came from the very bowels of hell.

A willowy male alien with six arms and ash-white skin stepped onto the stage. He had no eyes, just smooth skin and two thin holes for a nose. His mouth was a slash across the bottom half of his face, and when he spoke in his native tongue, it came through as a slithering sound. But even if Rylan wasn’t well versed in galactic languages, the speakers spaced out through the room translated the auctioneer’s words to the universal language known by almost all in their galaxy.

“We have a wide variety of females this evening, and a real treat, because we have a rare species on the block tonight.” He motioned with his hand to someone in the back, and the curtain parted to show ten females ranging in shape, size, and species. But the one who instantly had Rylan’s cock punching forward and nearly ripping right through his leathers, was the human at the far end.