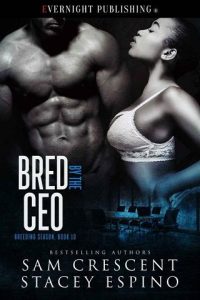 Just thinking of the name Darius Blackwood made her anxiety flare up. How was she supposed to ask him for a promotion? She’d been an entry-level accountant in his company for four years, and she was going nowhere fast. At the very least, she hoped she’d be something above a junior account by now. She didn’t have an office or a title. She was nobody.

Rose stood in front of the elevator, staring at the console. She was too scared to push the button that would bring her to the penthouse suite of the massive skyscraper. Part of her wasn’t even sure she’d get to see her boss at all since there was a network of subordinate managers and supervisors who dealt with all his dirty work.

A couple of kids raced after each other down the hall. It had been like that all day. It was “take your kids to work” day, and it seemed like everyone decided to take part this year. A woman in a tight skirt suit attempted to run after the two children, a stack of papers cradled in her arms. It was almost comical.

After another deep breath, she went through with it and stepped on the elevator. Within seconds, she was being whisked up, up, up. When she arrived on the penthouse floor, she held her breath as she stepped off. Rose had never been up here. Not many had. It was only talked about, like some fictional realm, but the stories were true. Everything exuded luxury, from the art on the walls to the light fixtures. She looked around in awe, trying to take in all the sights at once.

“Can I help you?” A man in a dark suit and pink tie rushed quickly in her direction.

Rose was still standing in the same spot, too starstruck by the lobby to move. “I’d like to see Mr. Blackwood.”

He lifted one eyebrow. “Do you have an appointment?”

“I work here. I just need a few words with him.”

“He doesn’t do walk-ins. If you work here, you should speak to the manager in your department. Mr. Blackwood doesn’t have time to deal with employee matters.”

She bit her bottom lip. Part of her knew something like this would happen. What did she expect? They’d usher her in and offer her an overpriced water with a lime wedge? She felt like an idiot.

“Elliot, get back here!” The secretary sitting at the massive crescent-shaped reception desk in front of them stood up and took pursuit. She was just in time to grab the sleeve of a little boy who looked to be around three years old. He laughed and tried to tug away from her. He had rosy, red cheeks, and bright blue eyes. Rose loved children but never expected to have any of her own. She was twenty-nine years old with no prospects. And she was pretty sure single virgins couldn’t have children.

Elliot started to have a classic meltdown as the secretary attempted to haul him back toward a rear office.

The entire building was complete chaos. Fortunately, this day only came once a year.

She was still watching the little boy when the man beside her cleared his throat. “Miss, you’ll have to leave.”

She had no plans of talking to her manager—again. For some reason, the older woman couldn’t stand her and never gave her any slack. A promotion was the last thing she’d get approved. It didn’t matter how much she killed it in the office, there was no chance to get ahead. It was disheartening, to say the least.

Just then, the little hellion ran toward the elevators with two women chasing after him. Rose bent down as Elliot neared, opening her arms wide. This seemed to distract the little boy. She smiled at him and winked. “I like your shirt. Are dump trucks your favorite?”

He peered down and pointed to the red truck over his stomach.

“What color is that?”

The little boy visibly calmed. “Red. That one blue.”

“That’s right. You’re such a smart boy. Do you like to play with cars and trucks?”

He took her hand and attempted to lead her deeper into the main office. She’d always had a way with kids, and she hoped she’d get to be a mother herself one day. At twenty-nine, those days were getting fewer and fewer.

Once she stood up straight, she noticed a man standing nearby, his arms crossed over his chest. For a moment, she was taken aback by his commanding presence. Then she froze in place when she realized it was actually Mr. Blackwood in the flesh.

Rose had seen some grainy photos in the hallways from old company events. For some reason, she expected him to have aged much more than he had. As discreetly as possible, she took him in from head to toe. His black hair had a light sprinkling of gray, but only on closer inspection. And his eyes were as dark as onyx.