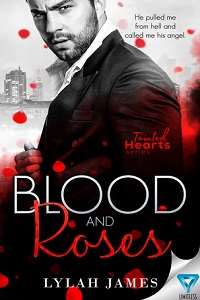 The gun went off, loud in the silent night. His screams were heard as another gunshot sounded. Blood seeped on the cold, hard ground as he writhed in pain.

“You are really stupid if you thought you would make it out alive,” Isaak growled behind me. I chuckled, because my bleeding captive was really stupid.

I tsked at the coward…and thief. Stealing more than tens of thousands of dollars from me would only lead to one end.

And his end would ultimately be death.

I squatted down beside him, tapping his head with the back of my gun. He stared at me with wide, frightened eyes. Poor thing. I wondered if my cold heart felt bad for this bastard’s ugly demise.

I cocked my head to the side, thoughtful. Do I feel bad?

I enjoyed his fucking pain. Best thing that could happen after a shitty day. Maybe I could sleep better tonight.

“I don’t know if you’re lucky or unlucky that I caught you in Russia. Did you think Solonik would help you escape?” I asked, pressing the barrel harder into his temple.

He winced and shook his head. Well, tried to shake his head. I had him pinned against the hard ground. He couldn’t move even if he tried.

“I’ll go for unlucky then. Because I can kill you, have your blood splattered all over the ground and wall, and nobody would care. Nobody would bat an eye,” I hissed in his ear.

I huffed at the thought. What a stupid little thief.

My eyes followed his twitching legs, where the two bullets had pierced the skin. I was tempted to torture him some more. Unfortunately, I had a meeting to go to. Something more important at the moment.

“I’ll let you go this time,” I said with a shrug. Standing up, I nodded at the end of the alley. “Go on, now. Run before I change my mind.”

He limped toward the end of the dark alley, his legs mostly useless. I could almost smell his fear from where I was standing.

I glanced at Isaak, who was leaning against the wall, a cigarette between his lips. He smirked and shook his head. I smiled too because the best part was finally here.

Raising my gun, I pointed at the back of the boy’s head, my sight secured on the spot. He didn’t notice the gun. He didn’t see his death coming.

Only because he was desperate to live—to escape.

Too bad for him.

My finger latched against the trigger, and I pulled it without a second thought. He dropped to the floor soundlessly, his body unmoving.

I walked over to where his dead body lay and kicked his feet. Nothing. His face was turned toward me, his eyes still open, looking at me lifelessly.

The fear in them was still there. I could also see the shock, the way his pupils were wider than before.

“I’m surprised they always fall for that line,” he said mockingly, staring at the unmoving body. “Can’t decide if they are either cowards or just plain stupid.”

“I would go with stupid.” I stuck my gun back inside my waistband and pulled my suit jacket over it.

Isaak scoffed before calling for clean-up. He rattled the address quickly before cutting the call off. “They’ll be here in five.”

We walked back to the black bulletproof Mercedes-Benz, its windows tinted for privacy. Absolutely nothing could be seen from the outside. Pretty useful when you had enemies on your case every day.

“To the Royalist,” I snapped as I got into the car. With Isaak in the front, the driver drove away without a single word. The drive wasn’t long, the club just a few blocks away.

When the car stopped and my door was opened, I stepped out into the fresh air. The dark, cold night masked our faces as we entered through the big doors of The Royalist.

At the entrance, the guard nodded his head and slightly bowed in respect. It was something given to me freely, without even asking.

They knew exactly how to greet a Boss. As he straightened, his eyes glanced around us, making sure we weren’t followed.

I walked inside with Isaak following closely behind. Several guards were stationed in the entrance hall. All of them nodded in my direction as I walked by.

The hall was lit by several really fucking expensive crystal chandeliers. We finally stopped in front of another door.

I raised an eyebrow at the guard, waiting for him to let us in. He swallowed nervously, rubbing the back of his neck.

He was obviously new.

“Is it only you?” he said in Russian, nodding behind me at Isaak. “And him?”

I glared and then snapped, “Yes. Do I need fucking permission before entering my own club?”