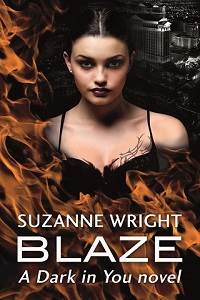 Snapping her gaze from her cell phone to the pistol now aimed at her head, Harper Wallis froze. Well, shit. She couldn’t deny that she had some karma to burn off. She was no angel. Being a demon, she was quite the opposite, in fact. But having a gun pointed at her by a human with a shaky hand and dilated pupils that said he was drugged up to his eyeballs… well, it just felt like the universe was being a little unfair, that’s all.

“Put the phone on the ground!”

She so didn’t have time for this. She’d taken a quick break from work so she could head to the ATM —

“Put the phone on the ground!”

“Do I really have to?” The floor of the alley was covered in grime, cigarette butts, glass fragments, and dirty rain puddles. Then there were those dubious-looking stains…

“Don’t make me repeat myself.”

With an inward sigh, Harper slowly did as he asked.

Note to self: Stop taking shortcuts through alleys. It wasn’t exactly a scenic route with the dumpsters, trash bags, moldy walls, and the scent of rotting food… although the graffiti was pretty cool. The artist definitely had potential.

“Hands up and keep them up!”

She raised her hands, all the while staring into blue eyes that flickered with nervousness. Sparky here wasn’t as confident as he was trying to appear. But he had every reason to feel at least a little confident. They were alone except for the rats, she was small where he was burly, and he had a weapon while she was unarmed – or, at least, that was what he thought. Not that the stiletto knife tucked into her boot was going to do her much good against a gun.

Really, she should know better. This area of North Las Vegas was high in crime… which, incidentally, was why her family fit right in. The Wallis demons were pretty notorious for doing exactly what all imps did: mostly lying, stealing, tricking, cheating, and, of course, breaking and entering. Although Harper was a sphinx like her mother, she’d been raised by her paternal family and was an imp by nature.

“Now throw me your purse!”

“You told me to keep my hands up,” she pointed out.

“Well, now I’m telling you to give me your damn purse.”

Okay, that was going to be a problem. It had been a gift, and she wasn’t going to hand it over to anyone.

How rude. Not that he was wrong. She was a bitch and she took pride in it. “I’m afraid I can’t do that.”

His brows drew together. “What?”

“See, someone very important to me bought me this. I tell him not to keep buying me shit, but he doesn’t listen. He likes to spoil me, even though it makes me uncomfortable —”

A burger wrapper crumpled under his foot as he took an aggressive step forward, lips flattening. “Throw. Me. The. Purse.”

Her inner demon snarled, eager for Harper to either slit his throat or do something equally entertaining. Like shifters, demons had a dualism to the soul. Shifters shared their soul with an animal. Demons, however, shared theirs with a dark entity – an entity that was without conscience, possessed a strong sense of entitlement, and lacked both empathy and the ability to emotionally connect. “Come on, give a girl a break.”

“Oh, I’ll give you something,” he said, a lewd gleam in his eyes.

Like hell he would. A dark yet protective power unfurled from within her and rushed to her fingertips, making them prickle. Her demon urged her to release it on the human, but there were other ways of dealing with him.

“You don’t want the purse,” she said in the compelling tone that all sphinxes were gifted with, enabling them to confuse people. Satisfied when his eyes glazed over, she continued. “You don’t want to hurt me. You want to drop the gun.” She wished she could compel him to never do it again or to confess his crimes to the police, but her compulsions wouldn’t hold that long.

A car honked in the distance, making him jump, and the glaze fell from his eyes. “Give me the purse!”

“This is getting tedious.” She flinched at a loud bang. Motherfucker. The human had shot at the ground in front of her feet. She wasn’t sure if he’d purposely missed; she had no interest in finding out. Before that shaky hand could shoot again, she acted. Faster than he could ever hope to be, she whipped out her knife, kicked the gun out of his hand, slammed him into the wall, and put her blade to his throat.

Breaths quick and shallow, he stared at her through wide eyes.

Well, he’d be a lot more scared if she’d granted her demon’s request and infused hellfire into the knife. It would be pretty funny to watch his face go slack, but that would expose herself as inhuman and… and was it just her or had the temperature dropped seriously quickly? It was also darkening fast. She looked up. A dark, heavy, ominous-looking cloud had formed.