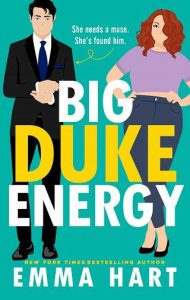 When bestselling romance author Ellie Aarons finds herself with chronic writer’s block, she’s pretty sure all she needs is a change of scenery. A beautiful lakeside cottage with her cat seems like a good idea.
She’s wrong. She needs more than a change of scenery—she needs a muse.
Which is why it’s so irritating that she’s drawn to the enigmatic but grumpy Duke of Windermere who owns the estate she’s staying on.
They don’t get along—not in the slightest. They could not be more different, which is why it’s so irritating that Max seems to be the muse she’s been looking for. No matter how hard she tries, she can’t help but picture him as the hero in her next book.
Oh, well. There’s really not a lot she can do about it. The muse wants what the muse wants.
Except Sir Winston Purrchill keeps exploring the goat barn, and Max’s delivery of him for the fiftieth time means he sees her manuscript open on her laptop.
He knows instantly that she’s writing about him. The story she’s written reflects their entire relationship until now, but that spicy scene?
That hasn’t happened. Yet.
Max is ready to compromise—he’ll give her the inspiration she needs for her novel, but she has to stop asking why he’s so against the relationship his grandmother desperately wants him to have.
With her deadline looming, Ellie has no other option but to agree.
She just hopes that she won’t do what her heroine is doing.
And fall in love with the duke.

Cockblocked By My Brain

His cock was huge.

I hit the backspace key until I’d deleted it all. Unfortunately, all that had achieved was giving me another great view of a blank page with nothing but the words “Chapter One” written on it.

I’d been here for eight days, staring at the endless whiteness that was the beginning of a new book.

It was new to me.

My writing process could be chaotic, but the only thing that wasn’t was the fact that I always had the first scene written before I officially started writing and tracking my words.

I’d written the first line what felt like one hundred thousand times, and I was shit out of luck.

My brain was broken.

There were no words in there.

I knew the working title. I knew the story. I knew how my down-on-her-luck heroine’s life would change after a chance meeting with a duke who was once her brother’s best friend. I knew how they’d fall in love and save each other from their messy lives, but I couldn’t write it.

This was a problem, to say the least. I had a tight-arse deadline from my publisher to adhere to and an awful lot of dedicated readers who were desperately awaiting a new book.

One that I couldn’t write.

The words were gone.

I was no stranger to a bit of writer’s block. Usually, a day or two away doing something mindless like sorting the towels or watching my favourite show or even reading a book would fix it, but not today.

There was a great wall there, stopping my fingers and my brain from communicating.

I’d never been in this position before.

It was a vicious circle of never-ending proportions.

I was somewhere in the middle of it all right now. The words just really weren’t coming out, and it was so stupid because they were there. In my brain. Swirling around and around the way tea did after stirring.

But I didn’t need them there. I needed them on the page.

I sighed and sat back in the chair, then tapped my nails against the surface of my desk. This just wasn’t working. I was simply doing the same thing over and over again, but it wasn’t like it was changing anything. I wasn’t getting anywhere.

This was… not good. My editor would be expecting an update, and what was I supposed to tell her? “Oh, I’m sorry, my brain doesn’t want to work so I have nothing but a working title that I despise and a vague idea of what might happen but I’m not really sure, actually.”

No, no… That wasn’t going to work.

“Fuck my liiiiife,” I breathed, burying my head in my hands. I clawed my fingers through my hair, digging my nails into my scalp, and dropped my chin right to my chest in defeat.

My phone dinged with a text message, and I reached for it, pulling it off the charge lead.

MEGAN: I hate my boss. She’s a snobby judgemental pious bitch and I wish I could hit her with a frying pan and throw her in a canal somewhere.

Ironically, I was feeling that way about my boss.

There was just one problem.

I was my boss.

ME: I, too, hate my boss. And you missed a couple of commas.

MEGAN: Shove your Oxford comma up your arse.

ME: Never. I’ll be buried with it.

MEGAN: What did your boss do?

ME: Her brain won’t work. What did yours do this time?

MEGAN: Ripped my entire marketing plan to pieces in front of the whole team. I fucking hate her so much. I need a new job. I’m going to get a new job.

She’d worked too hard for the one she had, and she was far too determined to prove to her boss that she was wrong and Megan was right.

MEGAN: ALL RIGHT BUT I WANT ONE.

ME: It doesn’t change the fact you won’t quit.

MEGAN: No, you’re right. I won’t. I’ll prove that snobby cow wrong if it kills me.

ME: It might. Your blood pressure seems pretty high.

ME: You should see someone about that.

MEGAN: I will. The CEO when I’m promoted above that bitch.