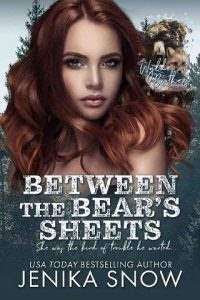 Ford had been disconnected for far too long, his inner animal—his bear—knowing from the beginning she wasn’t his mate.

But loneliness had people seeking warmth and a connection.

Had they even had that together? Maybe not.

But he wanted a change. Ford didn’t feel things he should in a relationship. They were two separate people now, the connection gone… if it had even been there at all, if he were being honest.

“You heading out?” Ford asked, but he wasn’t even granted a response.

Silence. It was always silence. His thoughts drifted to better times, happier ones that didn’t have him questioning everything and having the gut feeling that Mina wasn’t honest with him.

They’d had that cliched, young relationship, and he always hoped he’d feel something more for her. But she’d been there to help ease his loneliness. He used her in that way, and he was a bastard for it.

It wasn’t unusual for a shifter to be with a human, and maybe he’d been so sick of feeling that hollowness that he’d just given over to the need to feel… something.

But if he were being honest, he questioned what they were doing together from the beginning.

Mina came out of the bathroom dressed and grabbed her purse off the floor. “I gotta run, Ford.” She said it without even looking at him. Her makeup was freshly applied, and he caught the scent of the perfume she just spritzed on.

He wasn’t a fool, not when his inner animal smelled her desire. And the fact that she knew he had those attuned senses and didn’t even try to hide it or act like she cared had him feel… nothing.

This needed to be done, a Band-Aid pulled off fast. “Mina, we need to talk.” This conversation was a long time coming. Without looking at him, she adjusted her skirt and made an annoyed sound in the back of her throat. When she finally glanced up at him, he saw clear indifference.

“About what? I kind of need to get out of here, Ford. Can we talk tomorrow?” Her tone was annoyed. She went back to straightening her outfit. “I mean, I came over so we could hang out, but I could tell you weren’t here, not in your mind. It was a waste of time.”

Yeah, it really had been. He’d been trying to see if there was something there, a spark, a hint of a flame. But there hadn’t been a damn thing.

He felt the urge to shift into his bear, to go outside and find something to fucking hit, preferably a big-ass male who could give as well as he could take. “I know you’re not here, Mina, not really.” She stared at him in the eyes then, maybe surprised he was calling her out. “I know you have other males. I can smell them on you.”

And I don’t even care. How fucked up is that?

She didn’t say anything for long moments, and his annoyance was growing, his patience waning. He felt his claws unsheathe as his emotions took control, as he hated himself for wasting his time on someone other than his mate.

“Ford.” She breathed out heavily, impatiently. The pained expression she gave him appeared sympathetic, but he could fucking smell how bored she really was.

“Mina, I can’t do this. I should have never done this with you.” He ran a hand over his face, feeling like a failure. He should have waited, should have held out hope that he’d find his mate, the one female meant to be his. He opened his eyes and stared at her. “I’m sorry I wasted both of our time. I want you to be happy, and I do care about you… just not like that. I’m sorry.” He was a bastard, and he’d live with this guilt for the rest of his life.

“I just don’t understand why you didn’t just end it if you weren’t feeling it either.”

She was silent for a minute then asked, “Why didn’t you?”

He slowly shook his head. “I don’t know, maybe hope? Maybe I hoped something could grow out of… nothing.” There was that word again.

“I didn’t mean for this to turn out to be nothing, Ford. I really didn’t. I guess I liked having you around, my big bear who would protect me and make me feel safe. I used you, and I’m sorry for that too.” Her tongue poked out as she wet her bottom lip, and even though the words sounded sincere, he could tell there was a lot more she was going to say. “I met Kevin at the office, and we hit it off, fell in love almost instantly.” She cleared her throat, acting like she was uncomfortable.