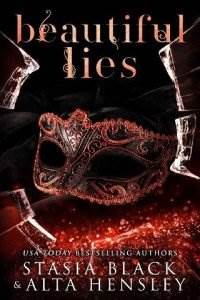 It was too sunny to bury a body today.

It should be raining, overcast, the classic cliché funeral scene. Instead, the bright light that shone from the cloudless sky risked revealing every dark shadow lurking in all of our souls. And I do mean all of our souls. There wasn’t an innocent person standing around my father’s grave, except maybe my younger sister Jasmine. But give our fucked up, rich society time… she was doomed as well.

Old money, Southern secrets, and proper etiquette were nothing more than poisons that would ruin us all.

The rays of light shining through the large weeping willow trees caused us to squint which seemed fitting in this situation. We stood with stiff spines and sour dispositions as we said goodbye to a man we barely knew. We were all nothing but strangers surrounded in the fragrance of magnolia blossoms and sticky sweat while mosquitoes feasted on our blue, silver spoon-fed, blood.

“Though I walk through the valley of the shadow of death, I will fear no evil,” the pastor recited like he had done a million times in his morbid career.

But we should fear the evil.

And yes, I most certainly walk amidst death’s shadow. Every step I make is one step closer to losing the person I once was. I will soon be nothing but a shell… just like my father.

My sister reached for my hand and gripped it tightly. Anyone watching us would assume it was an act of two siblings giving each other comfort. But the truth was that Jasmine held me in place. She knew I didn’t want to be there. She knew I wanted to walk away and never look back. She knew I felt nothing but hate and contempt. For a teen girl, she was more perceptive and aware than all the rest of these narcissistic assholes who pretended to be my father’s friends.

I was there for her, and only her, and thank God she reminded me of that fact before I bolted. My resolve weakened with every syllable of the pastor’s ceremony.

My mother stood on the other side of Jasmine, stoic in her black, lace dress that cost a fortune, no doubt. This was her moment. Her chance to play the grieving widow she had surely orchestrated in her mind several times to make sure she performed her role perfectly today. She dabbed at her eyes, but I knew it was all for show.

Sadness was not an emotion a single person felt this day.

Although I could be wrong…

Maybe there was a mistress or two who circled the coffin who truly grieved… grieved their meal ticket, that is.

It wasn’t like we hadn’t seen this death coming. My father had been dying for a long time, all by his own doing. You can’t smoke cigars every day, drink whiskey like water, pop pills for sweet dreams, and not expect your insides to become cancerous. Although his insides had truly become toxic the minute he’d become a man in our society’s eyes and took over the family steel manufacturing business.

And now it was my turn.

I was expected to do the same.

Today, as they lowered my father’s coffin into the ground, I would be expected to sign over my soul to the devil. I was to be initiated into a secret society in order to keep my family business and all the wealth associated with it.

The Order of the Silver Ghost waited for me.

Tonight was supposed to be the beginning of my Initiation.

My Trials of Initiation.

And even though I had just buried my father… the Order waited for no one.

“I hope they have everything ready for the wake by now,” my mother said as we sat in the limo leading the procession to our house. She twisted her white handkerchief and darted her eyes from one window to the other. “With your father now gone, the help has gotten lazy. I never did rule with an iron fist like he did, and they know it.”

“I specifically asked for lemon tarts to be there. They were your father’s favorite. But I didn’t remind Ms. Cooper this morning, and you know how her memory is getting.”

“I reminded her,” Jasmine reassured. “The lemon tarts will be set up, and everything for the wake will be perfect. Don’t worry, Mama.”

“Yes, God forbid we don’t have the lemon tarts,” I mumbled as I reached for the vodka bottle and tumbler hosted by the limo.

“Sully…” My name oozed off her tongue in her usual disapproving way. “Do you really think it’s wise to be partaking this early?”