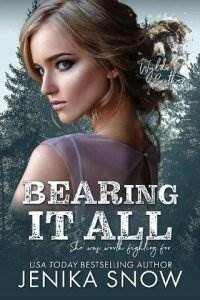 The stench of blood, sweat, and testosterone filled the small, dank basement. If a shifter wanted to do a little bare-knuckle fighting, Slater’s was the place to be. There were no rules or regulations, and the only time a fight ended was when the other male tapped out or lay unconscious on the dirty ground.

It was what Bram fucking loved. It also made the excitement that much more tangible when he had thrown back a few shots of whiskey, so he was partially numb. He might have been too old to be fighting like this, like he was some kind of young bear, but even at thirty-three, he had this wild energy coursing through him, and it seemed the only way to alleviate all of it was to kick another male’s ass.

Tearing off his shirt and tossing it aside, he prepared to fight the lion shifter in front of him. Bosco was a big motherfucker, and probably had a good thirty pounds and two inches on Bram’s two twenty-five, and six-foot-two frame.

None of that mattered much, not when the two of them could shift and their human forms would no longer be in calculation. This was all about letting out the animal that resided in them until blood pooled on the ground and flesh was torn.

Bram honestly didn’t know why he was like this. He had this violence inside him, one that couldn’t be expelled until he threw punches and connected with a living body.

He had always been like this, and although his brothers, Ford and Charlie, never had this intense need for violence and aggression inside them, they never judged, not really, and Bram never felt guilty for it. In fact, he relished it, absorbed the sensations that coursed through him, and let his bear have free rein.

Maybe he should have been more reserved, had better control of his inner beast like his brothers did, but he had never understood why Ford and Charlie felt the need to keep their bear under control. Yes, they were part man, but the animal always reigned supreme over their human side. It was as simple as that.

A human was no match for a predator, even if said man was also housing a fierce creature inside him.

“I’ve been waiting a long time to get my chance with you.” Bosco tore his shirt off, and the lion rippled under the male’s tan flesh. Yeah, Bram had seen the male eyeing him at every fight Bram participated in. Clearly, the lion had some kind of vendetta against Bram, but he didn’t give a fuck, because he was about to show Bosco why he never lost a fight.

Bram’s bear rose to the surface, snarling and snapping for the chance to get at the lion. He already had a few shots of liquor, and although he wasn’t drunk, the alcohol allowed him to feel more in control. Cracking his knuckles and grinning, Bram let his bear free. Bones popped, human skin tore open, and after only seconds, the transformation was complete.

He stood to his full ten-foot height and roared out. Bosco looked unaffected, the cocky bastard, but soon he’d be limp and bloody beneath Bram’s paw.

They met in the middle, tore at each other, bit into each other, and growled in anger. Pain was a hot poker throughout Bram’s body, but he wanted more, got high from the pain, and wasn’t about to be defeated. A wave of adrenalin washed through him, and he used all of that renewed energy to finish this.

He needed another shot. He was ramped up now, and before he went home for the night, he needed to get rid of it.

Bosco let out a howl when Bram sank his teeth into his side. He wasn’t going to kill the asshole, but maiming him was a whole other story. In a matter of seconds, the lion grew limp beneath him, and Bram took a step back. His massive chest rose and fell, and he looked down at the animal by his feet.

His bear was a fierce fucking creature and gave him the power he needed. He couldn’t describe why he was more primal than his brothers, but that was the reality of it. He got high off of it, and it made him stronger, bigger, and gave him the outlet he needed most of the time. Fighting seemed to placate his bear’s need to come out with a vengeance.

A few males off to the side eyed Bram cautiously. They stepped forward and dragged Bosco to the corner where they could check out his wounds. Bram hadn’t caused any serious injuries, but the lion would be hurting for a while; that was for sure.

If Bram hadn’t taken him down, it would be him that was lying limp on the ground. It was either man-up or get his ass kicked, and Bram was not going for the latter. He shifted back into his human form, grabbed his clothes that were in a pile on the floor, and quickly slipped just his jeans on.