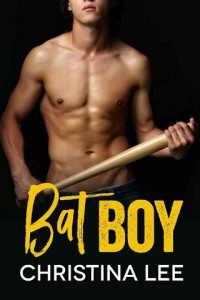 “How many games are left in the season?” Dad asked, scooping rice onto Mom’s plate from a large bowl in the center of the table.

“Twenty,” my sixteen-year-old brother, Ricky, answered without hesitation. He knew every single thing about my college baseball experience, from the schedule to the stats, and that had been the case ever since he caught the sports bug in elementary school. He absorbed baseball any way he could get it, from televised games during the major-league season to watching from the stands at my home games. Thankfully, my parents were supportive, the Easton University field was only about a forty-minute drive from my childhood home, and they enjoyed the sport as much as we did.

“How many of those are away games?” Dad asked with a smirk, knowing the answer would be forthcoming.

I kept my lips zipped tight as Ricky replied, “Eleven.”

“That’s right,” I said, then shoveled a bite of Mom’s stir-fry into my mouth.

Our official season began in February and lasted until the end of May, with workouts and practices beginning in the fall. We normally played one game during the week, a doubleheader on Saturdays, and a single game on Sundays. If it was an away game, we traveled by bus and sometimes stayed overnight, which led to all sorts of shenanigans that players would catch hell for if Coach ever found out, like sneaking girls into their rooms.

“We’ll be at your game against Turner State.” Ricky’s eyes rounded with excitement.

“Cool.” I high-fived him across the table. “Maybe you can help me with grounders after dinner.”

He fell silent and dug into his rice after that, careful to avoid all the pea pods on his plate and determined to get dinner over with so we could spend time together in the backyard. It was either that or building something together on Minecraft. My parents had put him in Little League once, but he would pick dandelions instead of focusing on catching the balls in the outfield. He’d rather watch sports than play them and, of course, discuss stats with whoever listened.

Mom winked at me, and I could tell she appreciated the effort I made with Ricky, but it really was a no-brainer. During the school year, I visited as much as my schedule would allow, and now that I rented a house near campus with two of my teammates, they were free to visit me as often as they liked.

“Think the Pirates have a shot at the finals this year?” Dad asked, referring to the NCAA Division II baseball tournament that took place after the season ended. It began with double-elimination brackets, leading up to the championship game, and Coach Crawford always played with that goal in mind. The Pirates were ejected early last year, but this time he thought we had a stronger team and a better shot. We worked hard because none of us liked disappointing Coach. It was as bad as disappointing our parents.

“We’d have to blow through regionals first.”

“You can do it,” my brother said with a huge smile, and it warmed my heart. “Besides, the team’s batting percentages have definitely improved this season.”

Fixating on facts was a feature of Ricky’s autism, and many times as a kid, I’d get super frustrated with my brother, which I felt guilty about as an adult. But as I got older, I understood him better—as well as his spectrum disorder—and knew that he just saw the world through a different lens, sometimes a cooler one.

Neuroatypical was the word I’d heard his new therapist using.

Honestly, my parents were awesome and had always supported my dreams, even when jealousy would rear its ugly head. I regretted those earlier stomping-and-pouting episodes when Ricky and his therapy appointments would take up most of their time. But the improvements he’d made, especially speech-wise, helped me appreciate what a struggle it had been for all three of them. It was the reason I stayed out of trouble—well, mostly. So I wouldn’t put any more pressure on my parents.

My best friend, Trent Hollister, called me The Golden Child, and not only for my unruly blond waves. He’d known me since grade school, we’d always played ball together, and he understood why I toed the line. No way I’d want my family to have any more setbacks. I’d worked hard enough to get a scholarship to Easton U so they didn’t have to worry about finances.

“Kellan says your fielding percentage is up too,” Ricky said once he swallowed a decent-sized piece of chicken, knowing Mom would urge him to clean his plate. This was one of the few meals he wasn’t as picky about.

“Did he now?” I replied in as nonchalant a voice as I could muster, even as my stomach gave me that strange, swooping feeling. It secretly thrilled me that Ricky discussed my stats with Kellan, the team’s resident brainiac-slash-bat-boy. Slash-adorable-as-hell-college-junior.