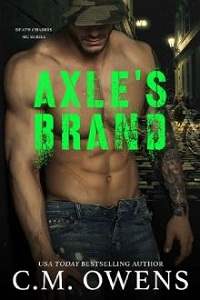 “I’m just saying, vajazzling is the new bikini wax. Girls have more bling down there than rappers have on their teeth nowadays,” Ezekiel says, grinning over at me. “What about you, Maya? Do you vajazzle?”

I roll my eyes, settling down on the comfy couch of the lounge, darting a gaze across the street where our parents are having their meeting. Through the floor-to-ceiling windows, I see them shifting around, my father smiling as he shakes the hand of Ezekiel’s father.

Kendra’s father is next, taking his turn to shake my father’s hand. It’s not the friendly handshakes that have my attention. It’s the tension in all their bodies. I can tell something is wrong.

“You should take her silence as an admission of guilt,” Carlisle says, smirking over at me as I turn my attention back to the group.

Ingrid bursts out laughing as I give him a horrified expression. “How did you know?” I ask seriously.

Ezekiel and Carlisle both give me stunned, gaping looks, until I crack a grin and wink at them. “No, I don’t have bling on my vagina,” I finally tell them, rolling my eyes. “I barely make the time for a bikini wax because I get tired of probing fingers down there.”

As they all break out into laughter, I turn my attention back to the window. Only a street divides us. My parents are up three floors and across said street, but I can see them clearly through the glass from here.

Anyone in this building can. Not that they mind, since no one knows who they are. But I still don’t like seeing them so exposed.

Or maybe I’m just living in a constant state of paranoia lately.

Something has felt wrong for a while.

“Where’s your boyfriend?” Kendra asks as she sips her cocktail.

“Thomas is in Manhattan with some of his old college friends tonight. I didn’t bother telling him where to find me, because he’s rather annoying when he’s drunk,” I answer with a smile to hide my annoyance.

I honestly have no idea where he is, but I’d rather not say that aloud. Our relationship is…unhealthy most days. Toxic on others.

“What about Lathan?” Ingrid asks me, her laughter tapering off. “Where’s he?”

Just as I see my mother sit down by my father, I once again look at my friends.

“My brother is absent. As always. He’s been an ass since Father made it official that I was the next in line for the Family. So I didn’t tell him where we’d be tonight.”

“He’s known that his entire life,” Ezekiel states dismissively. “Your father didn’t want the Family split in half, and Lathan is too hooked on drugs to be a leader.”

“So he’s icing everyone out,” Carlisle surmises.

“Not Father. He spoke to him today, but he only told him of the meeting he had to attend, and Lathan apparently hung up on him during the conversation. Father was trying to get him to go to rehab, and asked him to come by after he got back from the meeting. Didn’t go well.”

Ingrid blows out a breath, about to say something, when suddenly the building we’re in shakes hard. The floor rattles beneath us, as noise—just a steady, ear-splitting, undefinable noise—tries to deafen us.

Windows shatter, and Ezekiel tosses me to the ground, his heavy body coming down on top of mine. It’s all a blur of motion, nothing making sense.

Screams sound like distant echoes, and I manage to peer up as the building stops moving. My eyes go to the mostly shattered windows, and my heart leaps out of my chest.

I don’t know when I get up.

I don’t know when I start screaming.

I don’t know when I start fighting against Ezekiel’s hold, or when he even starts holding me back, preventing me from falling to my death in a quest to save my parents.

It’s like it all went black for a second, and suddenly I was at the broken windows, staring in disbelief at a room my parents couldn’t have escaped.

Ezekiel is still holding me back as I scream, trying to reach for the burning building across the street as the fire rushes from the room, chasing the outside air.

A second explosion triggers, and I’m launched backwards, the heat and pulse of it so strong against me that it knocks the breath from my lungs.

I blink, wondering when I got back on the ground, wobbling as I stand back up. Ezekiel is unconscious beside me, and Ingrid is slowly lifting herself off the floor, a cut on her head.

A ringing is constant in my ears, making everything else background noise. I see Carlisle’s lips moving as he comes to me, shaking my shoulders, but all I can do is stare past him and across the street at the destroyed top half of the building.