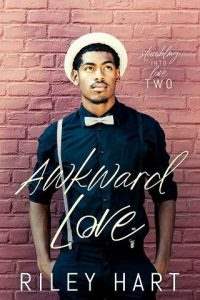 It wasn’t often I got nervous over things, but I was starting to realize that was probably because it wasn’t often I cared about anything enough to get stressed about it. Not that I was an asshole or anything. I gave a shit about people, friends, my family, and all that, but as I stood outside Crane Entertainment, a major Atlanta-based production company, I could acknowledge I’d never wanted anything the way I wanted this. Not the little type of want like hooking up for the night, but the major life-goals kind. They produced some of the biggest digital, film, and television media. That was huge.

And yeah, I was freaking the hell out.

But others would never know it. I’d perfected the whole cool-calm-and-collected facade over the years. I had to, growing up in my house. Being the youngest of four brothers, the one who stood out like a flashing neon sign compared to my siblings and father, it had been a vital part of keeping myself from not being absolutely miserable.

So I squared my shoulders, plastered an I’m-confident-as-fuck look on my face, and walked in.

This wasn’t my first time inside the busy skyscraper. I’d had three other interviews for a personal-assistant position, but this one was with the big guy—Leon Crane, who’d started this all from the ground up. It was him I’d be assisting when I nailed this interview, which I would definitely be doing.

I had to go to the concierge desk first and get a badge to be able to take the elevator up. It made me stand a little taller, feel a little more important that I was expected even though it was an interview, so no shit, I was expected.

Sometimes it was the little things.

The elevator doors opened on the eighteenth floor, which belonged to Crane Entertainment.

“Hi, I’m Will Carson. I have a nine o’clock appointment with Mr. Crane,” I told the woman at the front desk. Even our last names were similar—Carson and Crane. I was taking that as a sign it was meant to be.

I’d hardly sat down when the receptionist said Mr. Crane was ready and ushered me into his office. He was tall, wore a black suit, and kind of looked like Denzel Washington, only broader in the chest and arms. “Mr. Carson, I’ve heard great things. It’s a pleasure to finally meet you.” He held his hand out to me, and we shook.

“Thank you. I’m honored to hear that. Please, call me Will, and the pleasure is all mine. If I’m being honest, I still can’t believe I’m standing here.”

He laughed a deep sort of laugh. “Believe it. I’ve been impressed with what I heard.”

“You’ll be even more impressed when I start working with you.” I held my breath for a moment, hoping I was reading him right. He seemed the type of man who appreciated confidence in one’s abilities.

“Have a seat, please. I think the two of us are going to get along just fine. If you don’t believe in yourself, no one else will—and when you don’t feel it, always fake the hell out of it.”

We both chuckled, and any worry or fear I’d had melted away. This was exactly what I was supposed to do. There wasn’t a doubt in my mind that I was made for this.

Shaw raised a brow. “I take it the interview went well?”

His boyfriend, Elijah, was sitting on the couch. I walked over, lay down, and put my head in his lap.

“Comfortable?” Elijah cocked a brow at me. His fade looked freshly dyed blond. Elijah was one of the most beautiful men I’d ever seen—long, lithe, and bendy. He was a ballet dancer, with a set of abs to die for. His skin was flawless, a glowing light brown without a blemish on it. I kind of hated him for it, the lucky bastard.

“I don’t have a boyfriend, and it’s not that I want one, but every once in a while, it would be nice to reap the benefits. Since Shaw is my bestie, I’ll live vicariously through him. Plus, it’s fun to watch him get all alpha and mine over you. It’s like my sweet boy has grown into a responsible man, right before my eyes. We’re so lucky you came into his life.”

Elijah busted up laughing just as Shaw said, “Something is seriously wrong with you.”

“Well, I’m friends with you, so that’s probably it.”

“You guys are ridiculous.” Elijah stood, and my head flopped onto the couch.