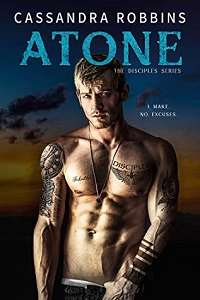 Oh my God. The loud rumble of their bikes on our driveway prompts me to grab a tube of shimmery red lip gloss from my back pocket and slather it onto my lips. They’re my best feature, so I try to draw attention to them. As my breath stutters, goose bumps appear and my cheeks flood with warm heat. Stuffing the lip gloss back into my pocket, I reach for the People magazine one of the waitresses left yesterday and try to breathe. Butterflies swim in my stomach as I purse my lips and toss my hair to the side, accentuating my profile.

The doors to my parents’ diner swing open and he walks in. Maybe walk isn’t the right word: saunters, glides, struts, whatever. He’s so beautiful, so hot that it’s all I can do to keep my eyes focused on the magazine. I have no idea what it says. Geez, it could be in Spanish. Wait, is it in Spanish?

“Charlize,” my mother snaps, and I shift my gaze to hers.

“What?” I straighten, tossing the magazine on the counter. She stands and frowns, hands on hips. Her knowing eyes scan my face, which of course makes me flush even more. I look down at my chipped nail polish and wonder for the thousandth time why she’s so beautiful. I love her, she’s my best friend, but it’s hard to live in her shadow. Especially, when she’s blond and blue-eyed and I’m dark-haired with strange, yellowish eyes. My dad calls them gold; I call them weird.

“Go in the back and make sure Jessica is on. She can take care of those men.” She reaches for my arm as if I’m three rather than seventeen. Her long nails dig into me as I try to wiggle loose.

“Mom.” My eyes dart to the hot guys laughing near the “Please wait to be seated” sign. “Let go,” I hiss. Her slim frame towers over me, which is saying something. I’m not short, but with her heeled boots, she’s almost six feet.

“Seriously?” I eye her. She still holds on.

“You know Jessica isn’t on yet.” I jerk my arm free before she can say anything and squeeze past her straight toward the hostess stand.

“Jesus,” I mumble and try to catch my breath because one of these guys… well, let’s say I spend way too much time masturbating to thoughts of him. He’s my go-to guy when I need to get off fast. I pull my cropped top down and smile at them. Both of them are fucking hot. Tall and lean, they’re so ripped you can see their abs through their T-shirts. One is blond, the other auburn. The ginger has blue eyes; light freckles dust his tan skin. My guy has no freckles and smooth golden skin, a hard jaw, and piercing gray eyes. I shit you not, they’re gray, like a storm cloud. Almost silver. And full lips that I wish would kiss me. But that’s never gonna happen. This particular guy is taken. Nervously tossing the hair off my shoulder again, I concentrate on walking sexy.

“Hi.” The moment I say it, I want to die. It sounds pathetic and obvious. I grab two menus from the wooden pedestal that holds our seating chart.

“Hey.” His voice is deep with just the right amount of huskiness. God, I swallow, hearing a menu thud to the floor. Somehow, I will my gaze away from his hypnotizing eyes to process that not only am I staring like a creeper, I’m also looking like a klutz. Happy now that my hair is so long it falls over my face and hides my burning cheeks and neck, I bend down to get the plastic menu.

Shit, shit, shit. He is unbelievably perfect. Even his smell is amazing… smoke and something. Maybe spice?

“No, thank you.” I pull a strand of hair that’s stuck to my glossed-up lips behind my ear.

“You sure?” He’s way too close. And my stomach flips as if I’m on a roller coaster.

Holy fuck, my eyes are aimed right at his crotch.

“Oh God.” I straighten up so that instead of staring at his junk, I’m back to his eyes. It’s so not fair. This guy is flat-out beautiful with tousled honey-wheat hair that’s altogether wild. His lean, muscled arms are covered in simple tattoos, unlike his friend who has colorful art all over his arms.

“Jesus, you two.” His buddy sneers behind me, reminding me that I’m making a complete ass out of myself.

I wave my hands and clear my throat. “So… follow me.” It comes out like a croak as I force my legs to move, one step in front of the other as I walk them to the Pulp Fiction table. Yes, my parents are actors, or used to be. My dad still is, or thinks he is. He still gets small roles here and there. I guess when he was younger, he made a living at it. At least, that’s what he tells everyone. Basically, his big claim to fame was a soap until they killed him off. Unfortunately, now his career is pretty much nonexistent, but he’s still holding on. I feel awful thinking this… but if he hasn’t made it yet, I doubt he’s gonna hit it at forty-five. Still, who am I to squash his dreams? Meanwhile, my mom did have a career and gave it all up when she got pregnant with me. She was on a popular sitcom. It’s how my parents bought our diner. But as soon as she got pregnant, my dad made sure she gave up her career, something I have to hear constantly. I mean, I love them both but wish they had made better decisions when they were younger. Maybe they would both be happier.