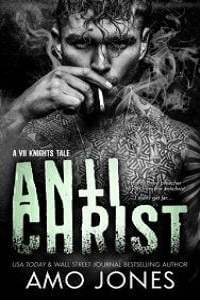 Cheating—a whole fucking lot of it.

I married the preacher to run from the Antichrist.

I didn’t get far. I didn’t expect to. Niko Davis was a monster with the things he wanted in life, and unfortunately due to my current circumstances, I fell under that. Not for love, no. For something much more sinister than that.

I thought I knew who he was—I think everyone thought they did—but what I got was a savage with a liking to the taste of my blood. The devil you know over the devil you don’t, right?

Wrong. Because the devil you know knows exactly how to present himself into something he’s not.

The Preacher is a force, but all forces can be controlled, and that’s exactly what I plan to do with this one.

“Meraki, venez ici!” I swirl my wine around the glass goblet and watch as the red liquid stains the clean areas. I sit at the head of the table with my eyes on the abundance of food that is laid out in front of me.

His footsteps become clearer as he rounds the high concrete archway into the dining room. His blond hair flops to the side when his eyes meet mine. Eager and hungry, but so damn alluring. “Tu vas bien, bébé ?”

A smile spreads over my face when I see him. Calm. Safe. “Oui, toujours.”

His widens, and the sun beaming through the stained glass in the cathedral room hits the colors of his hair. He takes a step closer. As soon as he’s right in front of me, his finger pressed to my lip, he whispers, “I’ll love you forever. Is that enough?”

I want to say yes, but truthfully it’s not. And it’s not that he’s a bad person, because he most definitely is not. He’s pure, good. Him coming into my life was a savior I never knew I needed, but would he be enough? Without being me, would he still be enough?

I graze my lips over his. “I—” Something sharp sticks to my chest, over my breast, and I lean backward, searching Preacher’s eyes. “What’s wrong?”

Color drains from his face, and I watch in slow motion as blood spills from his lips and his body turns limp in front of me.

I step back, noticing the blood spreading over his white linen shirt, my hand coming to my chest. “Preacher?”

He coughs and falls to his knees in front of me, squeezing my legs. That’s when I see him standing there, knife in hand and hoodie covering the outline of his face.

“So cute, baby.” His blood-sodden hand flies to my throat, pulling me into his chest while stepping over Preacher. “You thought you could live like a saint”—Niko leans in closer, the corner of his lip curling up into a sinister smirk while still flashing that stupid dimple. His lips move over mine—“but forgot that you’re claimed by an Antichrist.”

Sharp, arched ceilings reached up to stormy clouds like bladed talons hungry for the sinister taste of innocent angels hiding in the sky. Stained glass of Jesus, Mary, and whoever the fuck other disciples He had with Him stared back down at me. Judging. Huh. Yeah, I totally felt judged on the doorstep of God. There was an old bell that barely hung off the building by rusted nails and a stone male structure that now sank into the ground as if Hell was desperate to have it back. Two prominent arches housed the entry doors and right in the middle of the body of the building. The Cathedral. Everyone hated this place. Everyone but me. It was Halsin’s oldest standing building. It was timeless and archaic, but that’s what made it so fascinating to me. Halsin wasn’t only built around the canary and river that flowed through the main street of Old Town, but around the Cathedral too. Even though it’s buried in the middle of nowhere. Literally, you had to go off road just to reach it, and almost no one ever did. For as long as I had known, Luca’s parents had lived there, along with other people—we didn’t really hear much of them, though. Sunday service was run a little different in Halsin, and by different, I mean it’s just fucking weird. I loved the structure of the building, but I didn’t know why. It’s like the soil clung to my footsteps any time I found myself here, and that wasn’t often, since Luca’s father was a creep.