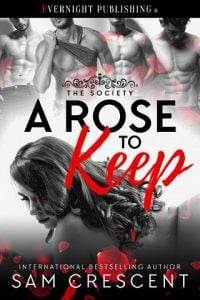 “You have everything, don’t you?” my mother asked not for the first time.

I didn’t know why she even bothered to come. We have this same play each time she takes me back to hell, no sorry, to school. If you could call All Saints Academy a school. It was a fucking death trap. A nightmare. Where the elites sent their kids, and yes, I was an elite but according to others, I was the lowest form of them. The kind of person who shouldn’t be there. I had every right to be here. My parents paid a fortune for me to be here and besides, they were wealthy. Both of them were the best damn lawyers in the country. Highly sought after, but they also came from old money. Neither of them was interested in their family’s businesses and that was the trouble with many elitists. They’d hired outside help to run the company, rather than keeping it in the family. They broke tradition and the royal rules, or so it would seem to those who cared about the academy. News flash, I did not.

“Mom, you sent my things over last night, remember? It’ll all be waiting for me in my room. I promise.” I grabbed my bag, going for the handle on the door to try to get out. It was senior year. The very last before college. My parents had applied to only the best within the country, but what they didn’t know was I’d also applied to some abroad. I wanted to get the hell out of here.

I wasn’t like the other kids. I didn’t see myself as better than anyone else, or higher up the social chain. It probably had to do with the nanny who raised me. A middle-aged woman named Drew, and I had loved her so much. She’d died two years ago of cancer. I’d found out after the funeral, and since then, my mother made it a ritual to bring me to school. To see me off like a mother would during kindergarten or something.

My mother never did any of those things. She may have given birth to a daughter, but her entire focus in life was her career. She wanted to be the best. It was why my parents had a volatile relationship. They were enemies in the courtroom and tale had it that they also hated each other in high school. Their mutual hatred turned to passion, then to love, then to me.

After slamming the door closed, I took each step into the battlefield. Drew had originally applied for me to go to public school and for a couple of years, I had. With my parents away so much, I’d lived with Drew and pretended she was my mom. I’d blended in well there. When my parents found out I wasn’t a member of their precious All Saints Academy, shit had hit the fan. Drew had been fired, and I’d been enrolled into this shithole. Not that it was anything like that.

There was no way anything shitty could touch these precious darlings.

To put it mildly, I so did not fit in here. Raised by a down-to-earth nanny, I loved the simpler things in life. Not the wealth, greed, and power these bastards did. From the moment I’d entered the school, I’d been public enemy number one. Why? I refused to wear designer. I didn’t bow down to them. And I was my own person. I didn’t care to join the crowds.

They could all go fuck themselves. There was only one other girl here that I liked, Heather. She wasn’t like the rest of them, but it also had to do with the fact she was a scholarship student. She was amazing. Her intelligence was through the roof. This school had been notified of her level of genius, and well, they gave her a full ride, also opening her chance to go to any college in the country.

The moment I spotted her, I smiled. Her hair was up in two ponytails at the back of her head. She always wore a little makeup, and she had on a pair of large glasses.

“Sian!” She yelled my name, and in the next second, we hugged.

We never saw each other through the summer. My parents dragged my ass across the country from one social function to another. When I’d been hoping to hang out with Heather, enjoying the beach, my parents had me at spas, beauty clinics, and going shopping. Each function required a brand-new dress.

So this summer, I had no choice but to attend every single high-flying society function, being thrust with the very people I detest.

“You know it’s happening today,” Heather said, walking with me as we headed to my building.

Heather lived a little closer to the faculty. I thought it was to make sure no one tried to oust her, or do anything to hurt her. The wealthy could do whatever the hell they wanted. The last scholarship student left years ago, humiliated, degraded, and wishing they’d never stepped foot on campus.